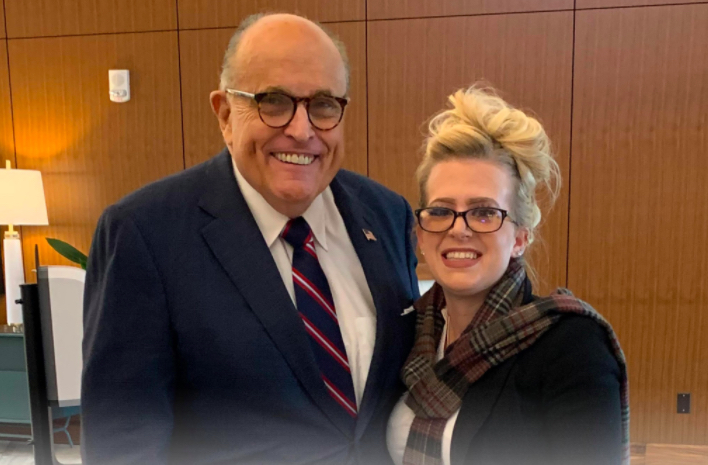 Rudy Giuliani and Mellissa Carone at the Capitol on Dec. 2.

Carone told The Washington Post she's living normally, has no plans to change and doesn't worry about the virus. She also said she was unaware of an Ingham County health advisory on Monday ordering anyone who had been in contact with Giuliani at close range, and for more than 15 minutes, to self-quarantine.

Carone testified next to Guiliani last Wednesday for about 30 minutes at a House Oversight Committee hearing on voter fraud. She also posed with him. Both her and Giuliani were not wearing masks during their encounters. Giuliani was hospitalized with Covid on Sunday at Georgetown University Hospital Center.

“I would take it seriously if it came from Trump, because Trump cares about American lives,” Carone told the Post about responding to the exposure. She said if television networks friendly to Trump such as One America News or Newsmax “told me to go get tested, I would do it.”

“It is not that I don’t believe in getting tested. I don’t trust the tests,” Carone said.

She described Giuliani as “one of the most respectful, polite, just down-to-earth people I have ever met. He is great.”

Two days after her testimony, Deadline Detroit reported that Carone was accused by police of sending her boyfriend's ex-wife graphic videos of the two of them having sex. She was also accused of harassing the ex-wife. She eventually pleaded the initial charges down to disorderly conduct, a misdemeanor.

The divorcee, Jessica, called Southgate police about Carone multiple times between November 2018 and September 2019, initially after receiving three videos from an unknown email address showing Carone and her ex having sex. Carone's last name was then Wright.

Last weekend, she was the subject of a "Saturday Night Live" parody.