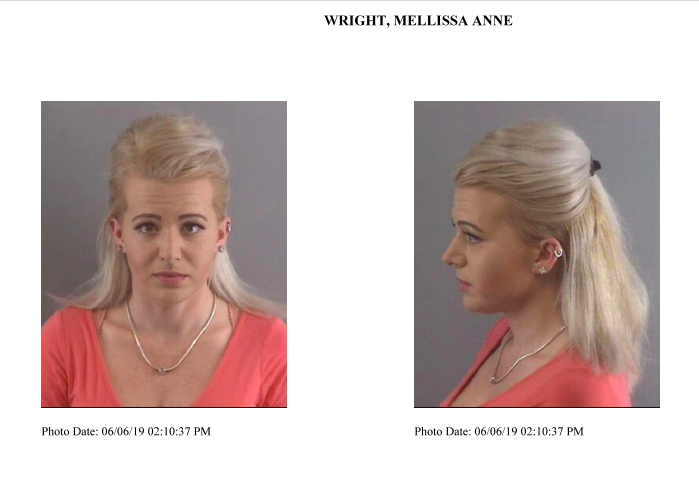 Mellisa Carone was arrested for obscenity and a computer crime in 2019. (Photo: Southgate Police)

Two years before she'd become the breakout star of the clown show Rudy Giuliani brought to Lansing this week, Mellissa Carone was sending her then-boyfriend's ex-wife graphic videos of the two of them having sex.

Police reports obtained by Deadline Detroit reveal obscenity and computer crime charges filed against the 33-year-old Grosse Pointe Woods mom stem from a harassment campaign she waged against a 42-year-old woman in 2018 and 2019. Earlier Friday, the Wayne County Prosecutor's Office said Carone pleaded the initial charges down to disorderly conduct, a misdemeanor.

Her boyfriend's ex-wife, Jessica, called Southgate police about Carone multiple times between November 2018 and September 2019, initially after receiving three videos from an unknown email address showing Carone and her ex having sex. Carone's last name was then Wright.

Carone served a one-year probation sentence. It ended shortly before she was contracted by Dominion Voting Systems to perform IT work at Detroit's TCF Center during the November election, where she's baselessly claimed she witnessed rampant fraud. She went viral this week with bogus testimony from two state Legislative hearings.

As of August 2019, Carone and Stackpoole had harassed Jessica for roughly two years, an officer's statement said. Records show Carone claimed it was retaliation for false accusations she said Jessica made about her in court.

Jessica told police Carone texted her in violation of a personal protection order that month. One text made mention of a fake Facebook account.

When the two encoutered one another outside the Southgate courthouse the following month, Jessica told police Carone drove around the parking lot twice, yelled “fuck you” and gave her the finger.

Carone, a mother of two originally from downriver, told police she was working toward her degree in cyber security when she was charged. She received an information technology certificate from ITT Technological Institute in 2015.

Carone and Stackpoole are reportedly now engaged. Facebook photos suggest they recently had a child together.

In a HuffPost story published Saturday, Carone recanted the story she gave investigators and claimed her fiancé sent the videos. Stackpoole backed her up.

Jessica tells HuffPost the couple tore her life apart. She believes their true aim in sending the videos was to frame her for stealing them, as the email address they came from included her maiden name.