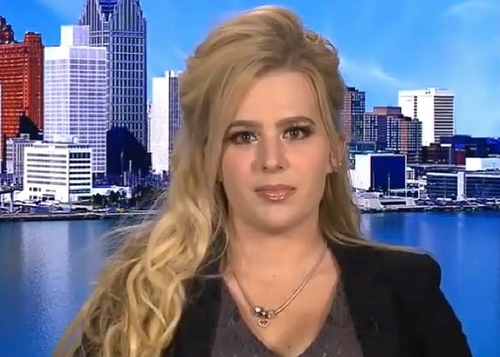 Mellissa Carone: "My ultimate goal is to ... clean out Lansing."

Mellissa Carone has registered a candidate committee to run for state representative in Michigan's 46th House District in 2022.

Carone has said she does not yet live in the district, which represents a portion of Oakland County. After inititally telling Deadline Detroit she owned property in Lake Orion, but declining to disclose where, she later said she was shopping for a house.

A candidate committee formed last week lists its address as a UPS location on South Baldwin Road. Its depository is in McLean, Virginia, outside Washington.

District lines will be redrawn by the election.

Mellissa Carone, who rose to memedom last month during a Michigan legislative hearing on election fraud, is hoping to parlay her infamy into a state House seat.

The former contractor for Dominion Voting Systems confirmed Friday that she's running for Michigan's 46th house district in Oakland County on a platform of election integrity after claiming, without evidence, that she witnessed rampant fraud at TCF Center in Detroit in November.

"My ultimate goal is to get our ballots hand-counted and clean out Lansing just like draining the swamp in D.C. because that’s what we need," she said.

Carone became the subject of a flurry of negative media attention and a "Saturday Night Live" sketch after filing an affadavit in an election-fraud suit and appearing Dec. 2 as a witness for Rudy Giuliani during a House Oversight Committee hearing in Lansing.

Dominion responded by sending a cease and desist telling Carone to stop spreading misinformation. Attorneys for the company said she did not have access to any insider information in her role at TCF, but that she'd been hired for one day through a staffing agency "to clean glass on machines and complete other menial tasks."

Asked whether her beliefs would further stoke dangerous divisions that culminated in disaffected Trump supporters storming the U.S. Capitol Jan. 6, Carone said, "Everyone that knows me knows that I’m not a dangerous individual and that I’m totally against violence. What’s dangerous is somebody stealing the election."

Featured_mellissa_carone__house_tv_46161
Mellissa Carone testifying in Lansing.
She went on to repeat debunked claims about shredded ballots in Georgia and say that 75 percent of Americans voted for Trump, something she knew "for a fact" and had learned from "numerous audits" and listening "to Rudy Giuliani every night — his comments on his YouTube channel.” The violence on Jan. 6, she also claimed without evidence, was "led by Antifa."

Giuliani, she said, would support her candidacy. The next House elections aren't until November 2022 and Carone, 33, doesn't live in the district where she's running. She claimed to have a home there in her name.

Carone was convicted of disorderly conduct in 2019 after sending her then-boyfriend's ex-wife graphic videos of the two of them having sex. She was charged after telling investigators she'd initially lied to them. She then again changed her story in an interview with Huffington Post in December.