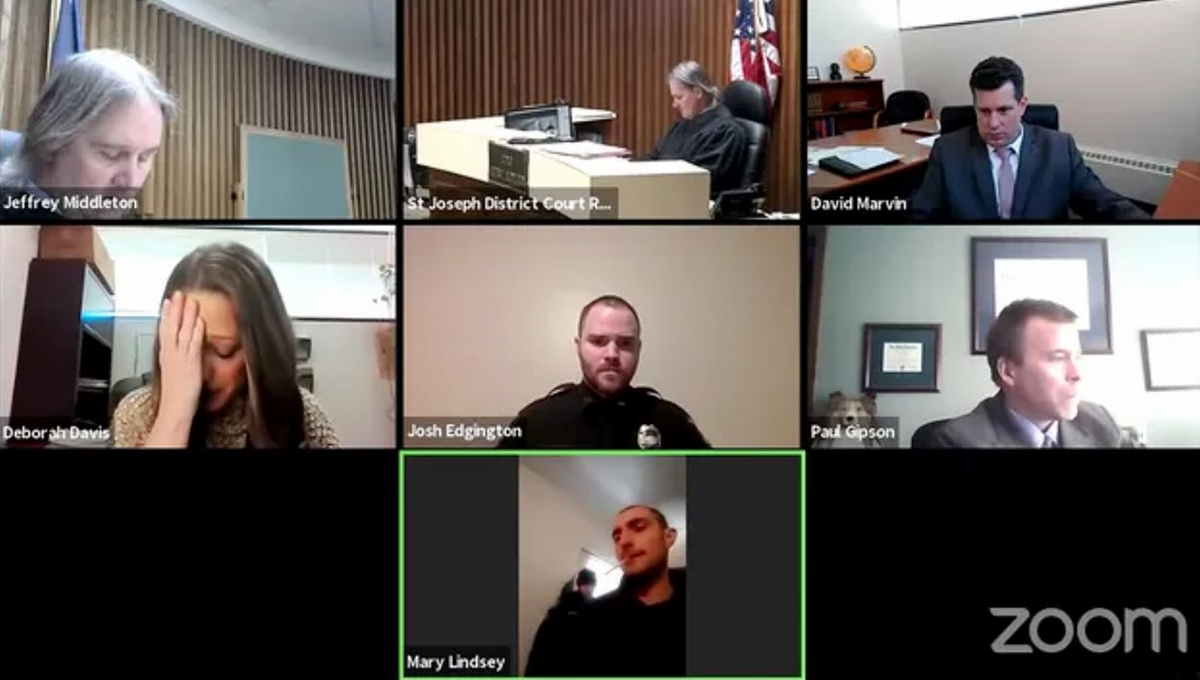 An online video of the session was removed from YouTube after two two days becuase it disclosed the complainant's address.

A livestream court hearing for a man accused of domestic violence turned from routine to dramatic when something made a Southwestern Michigan prosecutor "extremely scared."

Deborah Davis, an assistant prosecutor in St. Joseph County, alerted the judge that the 21-year-old defendant and the woman who said he hit her Feb. 9 seemed to be in the same place during last week's Zoom session.

It was a horror movie-like reveal: The call is coming from inside the house.

"I'm concerned about her safety," she told District Judge Jeffrey Middleton of Sturgis (at top left and center above).

Seven minutes into the March 2 preliminary examination, Davis says: "Your Honor … I have reason to believe that the defendant is in the same apartment as the complaining witness right now, and I am extremely scared for her safety. The fact that she’s looking off to the side and he’s moving around. I want some confirmation that she is safe before we continue."

The woman, Mary Lindsey, hesitated when the judge asked for her location. “Um, I’m at a house,” she replied, finally giving a Sturgis address. 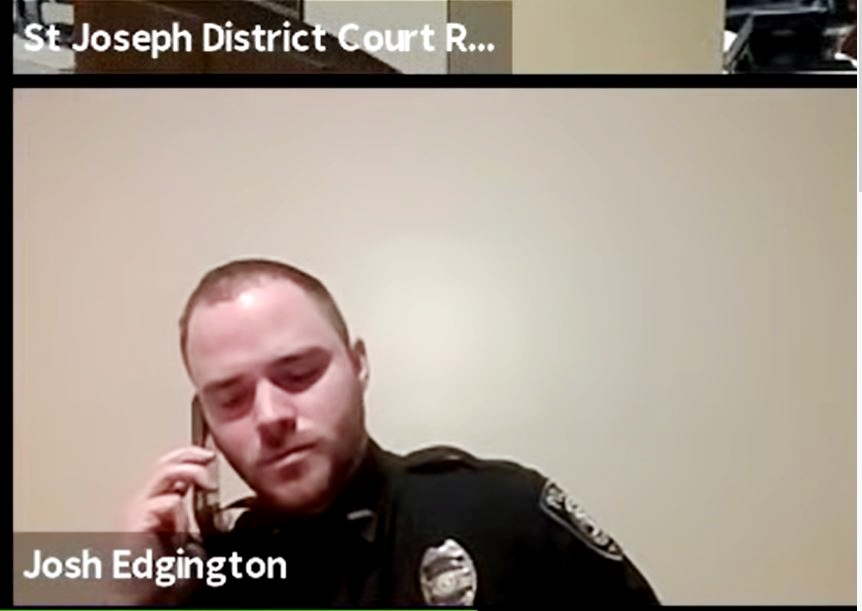 A Sturgis officer sends colleagues to the accuser's apartment during the unusual hearing.

Middleton then asked defendant Coby Harris to give his location and use his phone to show the house number out front. Harris declined, saying he had only 2 percent battery power and was plugged into a charger.

During those exchanges, a Sturgis police officer participating in the virtual hearing was seen making a call that sent two colleagues rushing to Lindsey's home. They found Harris there and arrested him at the judge's direction for violating a no-contact order imposed as a condition for his release on bond. Lindsey's phone camera, still videtotaping, showed the action.

"Your bond is canceled," the judge told Harris as the remote hearing continued with the defendant in handcuffs. "In addition, the prosecutor’s probably also going to charge you with obstruction of justice."

► 'A True Hero:' Viral Video Brings Praise for Michigan Prosecutor Who Saw Something and Said Something

After adjourning, though still on Zoom, Middleton said: "This is an issue we didn’t have when we were having live court. ... That's the first time I ever had anybody sitting in the next room potentially intimidating a witness to assault."

The official court video has gone viral, with over 1.3 million YouTube viewings.

Harris, represented by court-appointed attrorney Paul Gipson (middle right above) of White Pigeon, Mich., was appearing on a felony charge of assault with intent to commit bodily harm.

Lindsey said they had argued at her apartment, according to the Sturgis Journal. They had been dating, she told authorities.

The hearing resumes next Tuesday afternoon, when Harris will appear from the county jail.

"This guy might be the only person in the world to figure out how to violate bond while showing up for court," says YouTube commenter Nathan Lang under the now-deleted video.