'I feel great,' Detroit journalist Danny Fenster says on way to U.S. after release in Myanmar 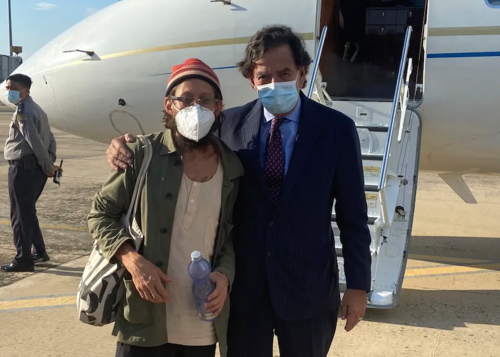 ► Update: During a stop in the Mideast nation of Qatar on his way home, freed journalist Danny Fenster said he wasn't physically abused or denied food during nearly a half-year of imprisonment in Myanmar. 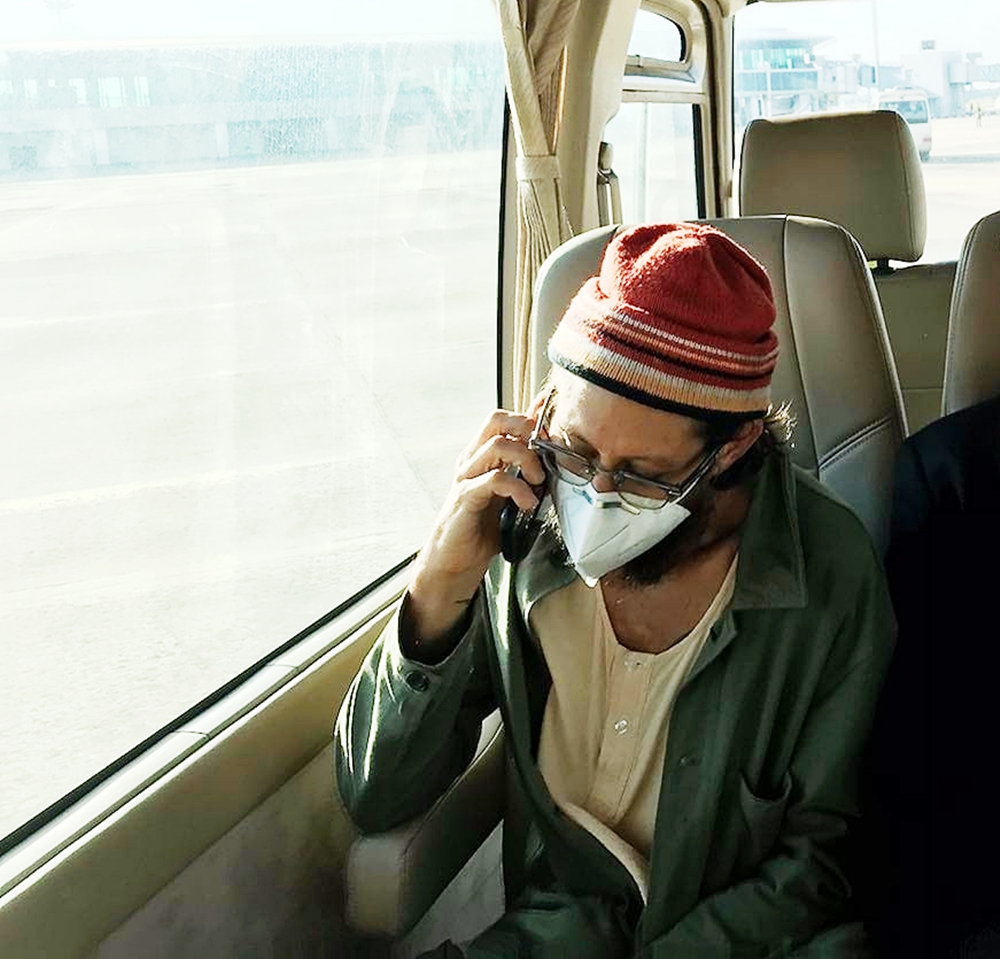 Danny Fenster this morning at the airport in Yangon, Myanmar. (Photo: The Richardson Center for Global Engagement)

"You just go a little stir crazy and the longer it drags on the more worried you are that it's just never going to end," Reuters news service quotes him as saying on the tarmac at Hamad International Airport in Doha.

"That was the biggest concern, staying sane through that. ... But physically, I was healthy. I wasn't starved or beaten. ...

"I feel great and am really happy to be on my way home. I'm incredibly happy for everything Bill has done," Fenster, wearing a red woollen hat, loose-fitting trousers and a white Covid-19 mask, said after flying to Doha with Bill Richardson by jet.

Detroit journalist Danny Fenster, who had been imprisoned in Myanmar since May 24, was released Monday and put on a plane headed to Qatar and then New York.

"He sounded like the old Danny." He also said how much he loved his family.

The family had been working intensively for his release from the day he was detained nearly six months ago in the Southeast Asian country where a military coup took place in February.

The released captive looks thin, with long hair and a thick beard reaching to his neck.

Former New Mexico Gov. Bill Richardson and his organzation, the Richardson Center for Global Engagement, announced the release Monday in a statement:

"Danny and the Richardson team will be making their long journey home, through Qatar, over the next day and a half, and look forward to uniting Danny with his parents, Buddy and Rose, as well as his brother Bryan, in the United States. 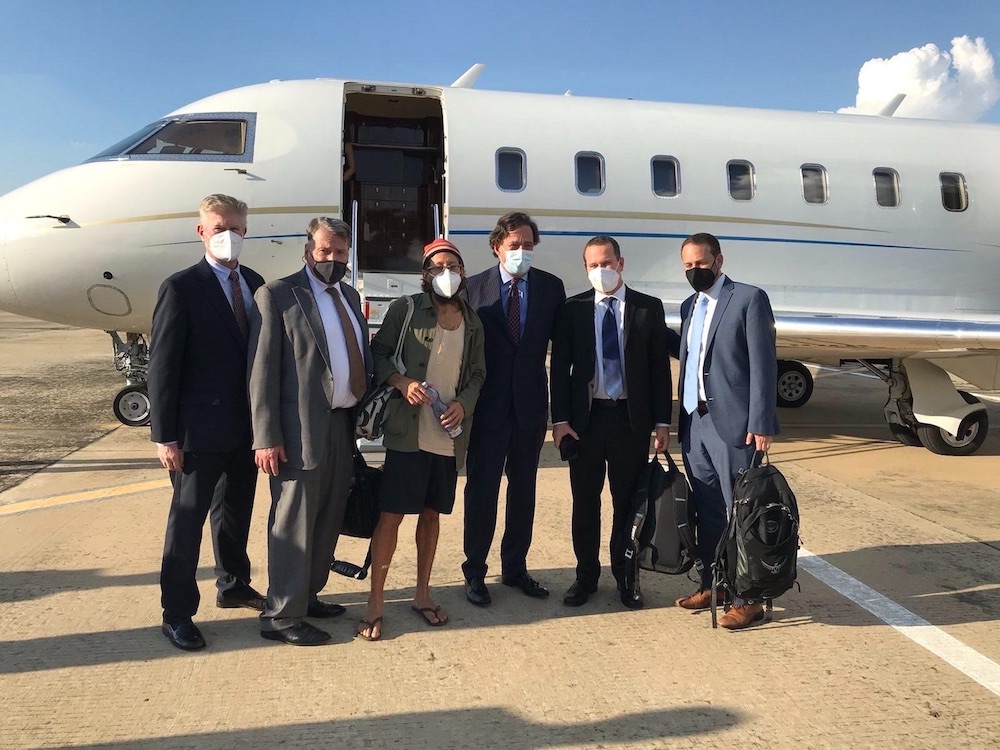 “This is the day that you hope will come when you do this work,” said Richardson, making his second visit this month. “We are so grateful that Danny will finally be able to reconnect with his loved ones, who have been advocating for him all this time, against immense odds."

Richardson is a former ambassador and energy secretary. His nonprofit center in Santa Fe describes itself as promoting global peace and dialogue.

He has made numerous trips to Myanmar since the 1990s to negotiate with generals who ruled it then and now. He's the most prominent Western figure to meet with military leaders since they overthrew an elected civilian government nine months ago. 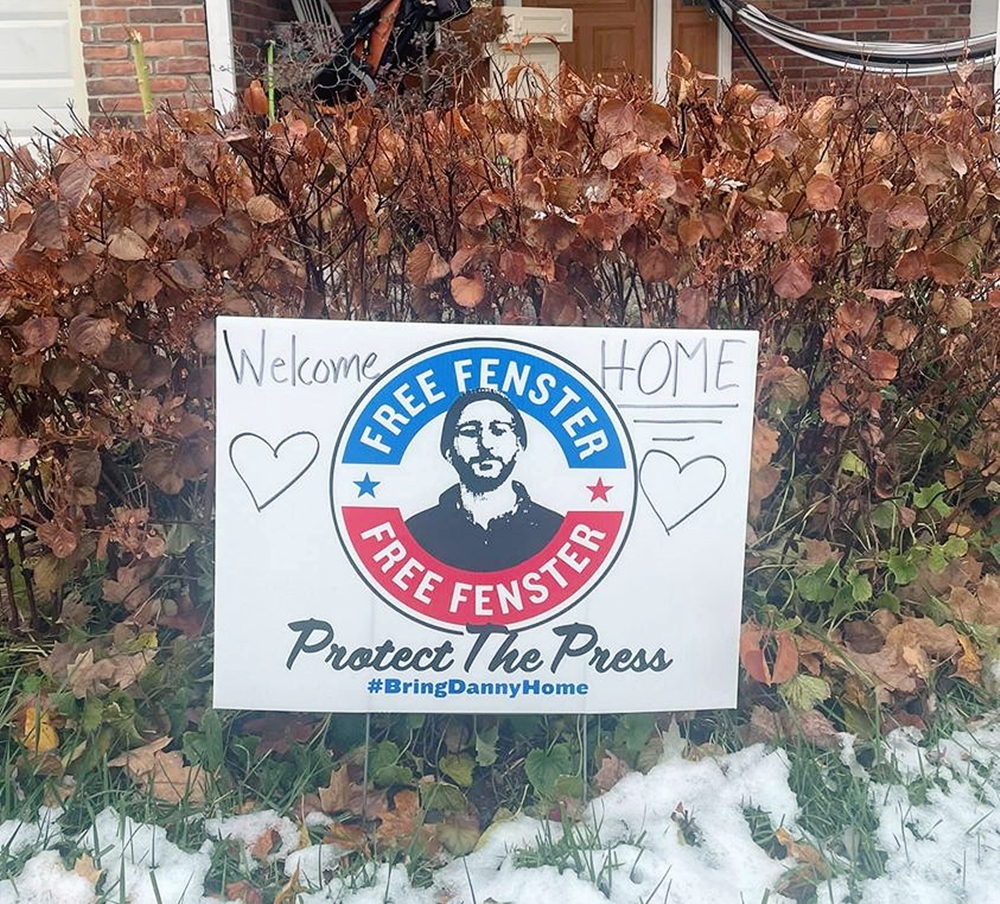 Bryan Fenster, who spearheaded a nearly six-month campaign to free his younger brother, posts on Facebook: "Day 176!!!!! We did it, friends.

"We are OVERJOYED that Danny has been released and is on his way home – we cannot wait to hold him in our arms. We are tremendously grateful to all the people who have helped secure his release, especially Ambassador Richardson, as well as our friends, family and the public who have expressed their support and stood by our sides as we endured these long and difficult months. I don't know how we could ever express our gratitude."

He went on to thanks relatives who helped in the campaign to free Danny, writing: "On behalf of the Fenster-Racey-Kurzweil families, we say THANK YOU and we love you so much."

Fenster's release comes just days after he was convicted on three criminal charges and sentenced to 11 years in prison. The charges included spreading false information with the intent to incite violence against Myanmar’s coup regime and violating the immigration law.

Fenster, 37, had been scheduled for another trial Tuesday on charges or terrorism and treason. He had been working as a journalist in Myanmar more than two years, most recently as managing editor of Frontier Myanmar, a news and business weekly.

Rose Fenster said she and her husband Buddy learned about the release at about 3:40 a.m. through a family text from their son Bryan. "It was total relief, it was like a ton of weight was lifted," she said. "We're anxious to see him.

"What has this six-months done? I don't know. We realize all the love and support from our family and friends and community and beyond has been so amazing and it's puts life in perspective."

His case earned international attention, a supportive tweet from the rock band U2 and an outcry from media freedom groups. Fenster was honored in absentia Oct. 20 by the National Press Club in Washington with a Press Freedom Award, which "recognizes one international journalist and one domestic journalist who bravely push to disclose the truth in trying circumstances."

Fenster grew up in Huntington Woods and later lived in Detroit where he freelanced and earned a masters degree in creative writing from Wayne State University. He later moved to Louisiana to work at a newspaper in New Iberia. From there, he moved to Southeast Asia, first Thailand and then Myanmar.

This reaction comes from a congressman whose district includes Huntington Woods and who has been in regular contact with the family:

When Danny Fenster cleared Burmese airspace and we knew he was free, this was probably the happiest moment of my time in Congress.

Among those welcoming the news is Elizabeth Whelan, sister of Paul Whelan of Novi, imprisoned in Russia on espionage charges. "The Whelan family is thrilled to hear it," she tweets from Edgartown, Mass. "One less American citizen wrongfully detained."

We welcome the release of American journalist Daniel Fenster from prison in Burma, where he was wrongfully detained for almost six months.  I commend Ambassador Tom Vajda and his team at U.S. Embassy Rangoon, Special Presidential Envoy for Hostage Affairs Roger Carstens, the expertise of Consular Affairs and the dedicated partners, including Governor Bill Richardson, who helped facilitate Danny’s release.

We are glad that Danny will soon be reunited with his family as we continue to call for the release of others who remain unjustly imprisoned in Burma.

This developing story will be updated.