2019 Recap: Kanye West comes to Detroit and takes it to church

This repost from Sept. 27 is the fourth in a Top 10 countdown of high-impact 2019 articles, a daily series through New Year’s Eve. Choices are based on readership and staff selections. Links to earlier installments are at the end.

Say what you want about Kanye West, an artist who provokes strong feelings -- the alternatively medicated bipolar sufferer, the peddler of insanely expensive athleisure clothing, the mic-grabbing I'm-a-let-you-finish awards-show disruptor, the genius producer / performer, the less-genius producer / performer, the MAGA-hat wearing sucker-up to the president, the guy who said the last Republican president didn't care about black people, yeah, that guy -- you have to give him this: 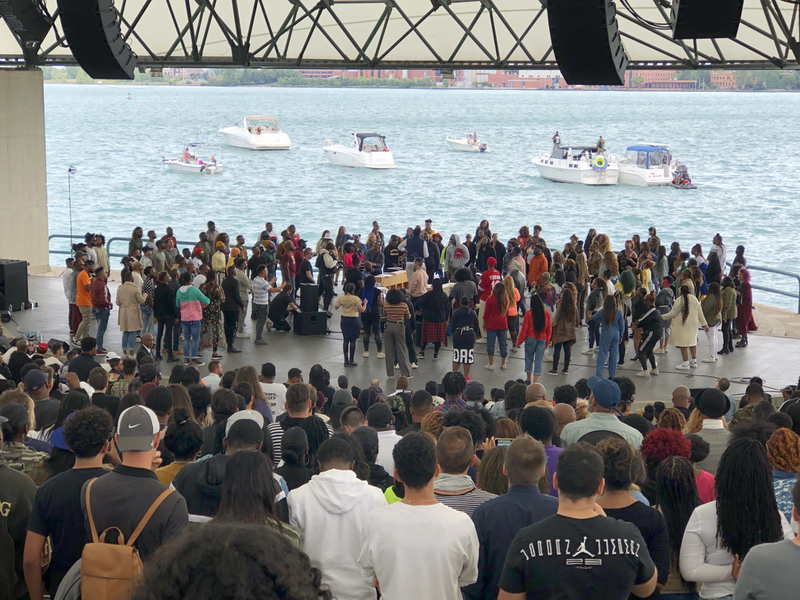 The joyful noise could surely be heard in Windsor. (Photo: Nancy Derringer)

He can get 6,000 Detroiters to show up to church on a weekday, on about 24 hours notice.

West brought his "Sunday Service" concert series to the Aretha Franklin Amphitheatre Friday afternoon, a show that was supposed to start at noon but was delayed 90 minutes, because Kanye. Those thousands not only stayed in their seats, when a false-alarm sighting of West came an hour and 20 minutes past showtime, fans squealed "there he is!!!" and the whole place rose to its feet.

But it was 10 more minutes before the musicians came out to a tightly grouped instrument setup to begin warming up with a little organ music.

None of this was unexpected; the Sunday Service shows have been going on for a few months now, featuring West and a choir recruited and rehearsed in a few days in whatever city he's playing in. The call went out for Detroit sopranos, altos and tenors earlier this week, with the venue and time announced only Thursday. In past appearances, sometime the choirs perform in Yeezy-designed choir robes that look like XXXXL T-shirts.

When the large, roughly 50-person ensemble took the stage a few minutes later, they were unrobed, tight as a drum and very lively. And while West was among them, this was decidedly not a Kanye show. This was a gospel show choir performance. A seriously churchy one, too; in prior engagements they've performed such non-churchy numbers as "Smells Like Teen Spirit" or "Drop It Like It's Hot," but the tone Friday wasn't that winking at all.

The opening number was "Hallelujah, Salvation and Glory," followed by West's own "Ultralight Beam," a very churchy number, and churchy as hell when sung by a 50-voice choir. "Father Stretch My Hands," another track from 2016's "The Life of Pablo" came after that, the only song where West himself took the spotlight, and only for one verse.

The crowd was hard to read, a combination of hip-hop fans and others in full church outfits, Jesus people and Yeezus people. The Jesus people obligingly kept the religious tone going, raising hands and sitting patiently through a 15-minute sermon by a Los Angeles preacher that actually quoted chapter and verse here and there; anyone expecting an altar call could be forgiven.

But Pastor Alan yielded to more singing, and the show wrapped after about 90 minutes.

Bianca Andrews said the show wasn't what she expected.

"I thought there would be more Kanye presence," the 41-year-old Detroiter said. "But the music was great."

"I love what he's doing with the gospel," said Christensen, 25, who is studying gospel piano. "And I'm a lifelong fan of his anyway."

Whether they left befuddled or spirit-filled, the best summation probably came from a fan leaving the amphitheatre with friends. "He's a musical genius," he said. "You just never know where he's going to go."