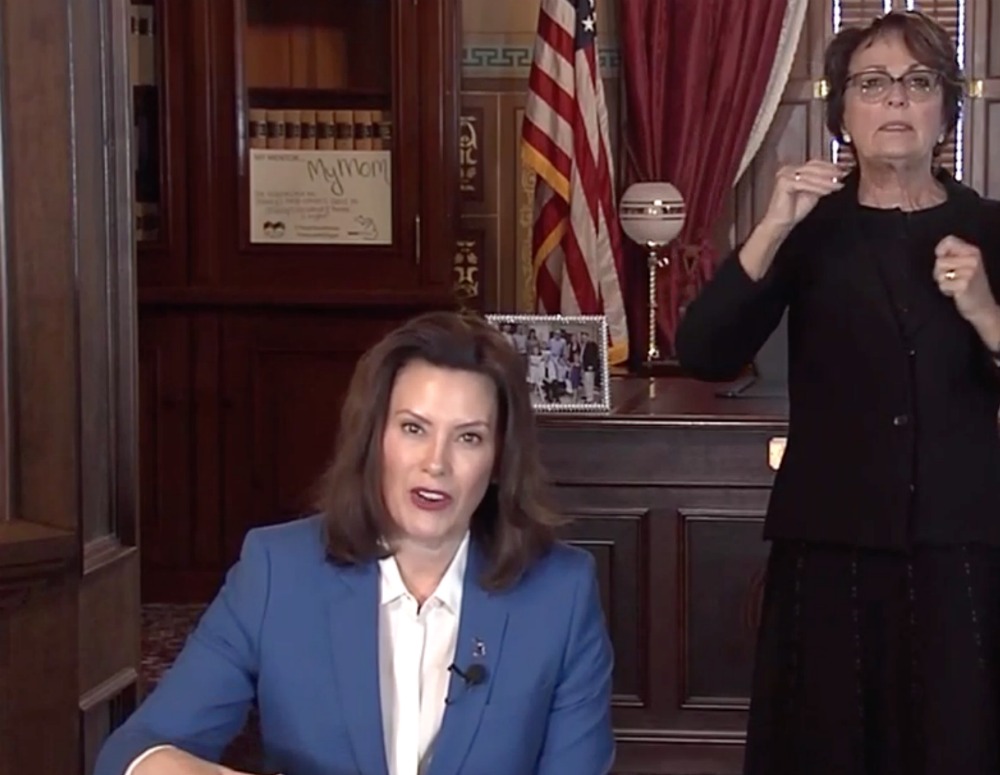 Following the lead of seven other states, Gov. Gretchen Whitmer on Monday announced a stay-home order for the state of Michigan, requiring people to stay indoors except for essentials. The order will be in effect at least three weeks.

It restricts movement that is "not necessary to sustain or protect life" and allows people working in some professions to continue to go to work. Some outdoor activity and grocery and hospital visits are also allowed.

Workers in more than a dozen sectors are exempt, including health care, public safety, public works, energy and “critical” manufacturing.

It does prohibit gatherings of any size outside of a home. Though places of worship remain exempt from penalties for violating the order.

Whitmer said that the number of confirmed cases doubled over the weekend, and since there is no cure or vacine, isolating people was one of the most effective ways to stop the virus from spreading.

If we don't stop, she said, the hospitals will be quickly overwhelmed with cases.

She said there's a projection by experts, that  if things spun out of control in Michigan, 70 percent of the 10 million people would be infected. And of that, one million would need to be hospitalized.

"We have about 25,000 acute-care beds in Michigan," she said. "Think about that. That’s where we are headed currently, so stopping the spread of this virus is the most important tool we have right now to keep our community safe."

On Sunday morning, Whitmer did the rounds on the cable TV news shows, including Fox News, and defended her decision not to do a statewide lockdown, but hinted that could change.

"Trust me, we are continuing to determine what we need to do to keep people safe, and to keep our health systems from being overwhelmed," Whitmer told Fox News host John Roberts.

On ABC's "This Week," she said: "We're all building the airplane as we fly it right now. We're doing the best that we can."

Here's a snippet of her appearance on Fox with host Roberts:

Roberts: Where are you, governor, on this idea of a stay-at-home order like the state of California, like New York state, others are considering it as well?

Whitmer: Yes, so I -- you know, things are moving fast. We're getting information hourly and I mean it will continue to climb and so we are always evaluating. We've got an ongoing debate about what the next step is. And I would anticipate additional steps being taken because we've got to be serious about this.

Roberts: One thing that kind of puzzles me is that you -- you have limited groups of people to 50 or fewer, yet there was an exemption for places of worship. Why would a place of worship be any less likely to transmit disease in a larger gathering than another place would?

Whitmer: It's not. It's not. And we're discouraging people from gathering at all and we're encouraging everyone to stay home.

Roberts: So why this exemption?

Whitmer: Well, you know, the separation of church and state and the Republican legislature asked me to clarify that. We are -- you know, that that's a -- that that's an area that we don't have the ability to directly enforce and control. We are encouraging people, though, do not congregate. Do not go to church on Sunday and sit next to people that, you know, could be spreading the -- the COVID-19. You yourself can be carrying it and you might not even know it. That'd be the worst thing in the world is to go to church to worship and to sit next to someone and infect them and have them suffer life -- you know, life-threatening consequences because of, you know, this decision.