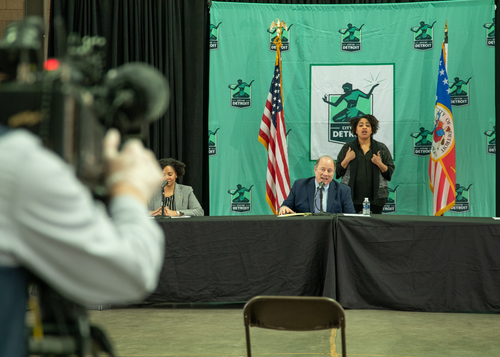 The city of Detroit expects to lay off or cut nearly all hours and pay for 1,100 part- and full-time employees to help bridge an estimated $348 million revenue shortfall over the next two fiscal years.

Mayor Mike Duggan announced the proposed cuts in a Tuesday evening address for Detroit employees, calling it "the biggest budget crisis the city has seen in seven years," since it became the largest U.S. city to file for bankruptcy.

Just over $150 million in revenues are expected to be lost through the fiscal year ending June 30, and just under $200 million will be lost in the next. The city's annual operating budget is about $1 billion.

Duggan hopes to save $44 million over that period through personnel cuts, which will include more modest furloughs and reductions for another 1,900 of the city's approximately 8,000 employees. A two-year suspension of demolitions will save an additional $72 million.

To cover the remaining $151 million projected deficit, Duggan said the city would tap into rainy day and surplus funds.

The personnel cuts are as follows:

Those facing layoff and furlough will be eligible for unemployment or under employment benefits, with the city to file for them. The cuts go into effect Monday and will last an unspecified period of time.

The city is in a unique predicament because it derives just 10 percent of revenues from property taxes and nearly 20 percent from casinos. Duggan said that, other than Las Vegas, Detroit's finances will likely be the hardest hit of any major city.