Updates will be added through Tuesday night.

It's not Lil Pimp

A distinctly different Grand Rapids note comes from a Politico writer at President Trump's campaign-closing rally there at midnight Monday:

Trump gives the rapper Lil Pump time to speak at his rally in Grand Rapids and intro’d him as “Lil Pimp” moments after playing a supercut of Biden gaffes.

This may not be today's last heads-up from Lansing about disinformation:

[AG ELECTION ALERT]: Dearborn voters, text messages are reportedly being sent to trick you into thinking there are ballot sensor issues. Do not fall for it, it's a trick! Visit https://t.co/7MBWZSJ4Zd and follow @MichSoS for any updates. pic.twitter.com/NEot16yIqD

One text reportedly said a "typographical error" meant that people who back Joe Biden had to select President Trump instead, and vice versa.

Supino Pizzeria alongside Eastern Market shuts today "to make sure our staff doesn’t have to make any difficult decisions about whether to take the day off," the Russell Street hotspot owned by Dave Mancini posts on Instagram.

"We think it’s important that every voice be heard. In the spirit of that philosophy, we’ll be paying everyone on staff for the equivalent of a shift. Get out and vote!"

This unusual election in an unusual year brings an uncustomary warning from Michigan's secretary of state. Secretary of State Benson urges voters to "be vigilant against any and all attempts to 'hack' their minds with scare tactics and other attempts to lessen their faith or confidence in our elections." 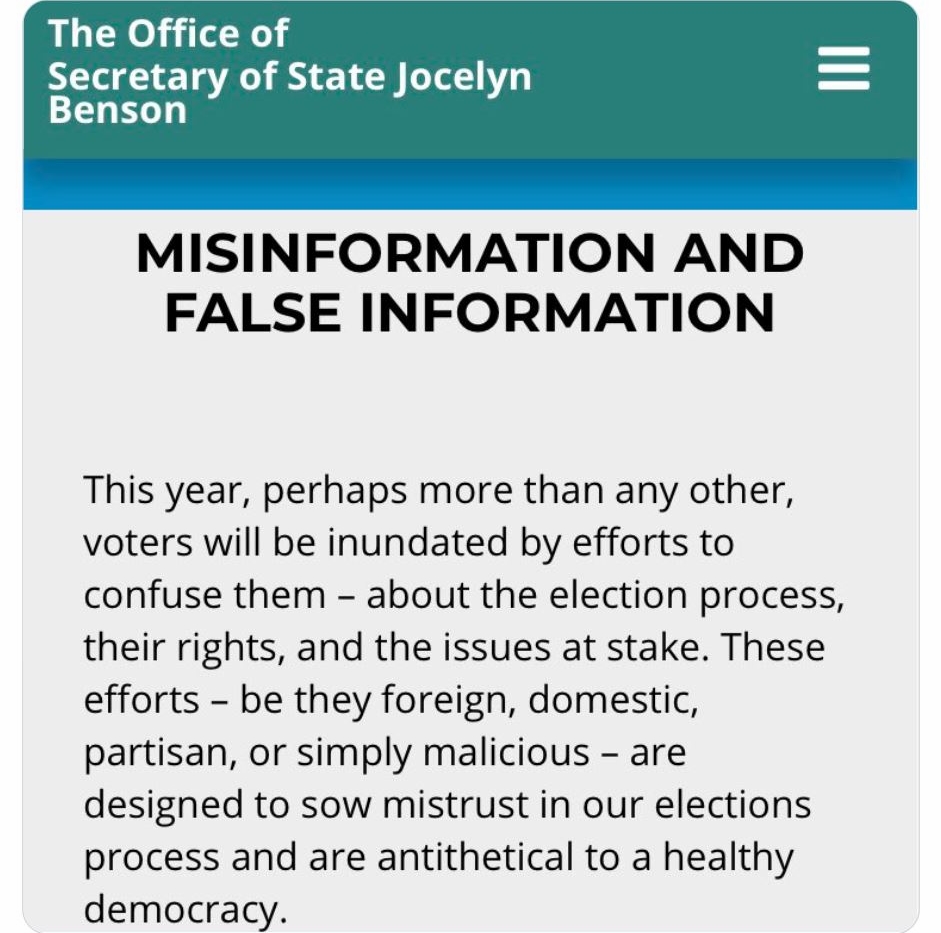 This is among guidance at her agency's "Election Security Fact Checks" page:

Complete results will not be available on election night.

This is because absentee ballots take much longer to process and count than the ballots that voters use at polling places, and are often counted in separate locations focused on processing them accurately and efficiently. Security checks must be performed, envelopes must be opened, and the ballots must be tracked, flattened and run through the tabulation machine. ... The Michigan Legislature provided clerks only 10 hours [to do that].

For this reason, complete, unofficial results from all jurisdictions will not be available in Michigan on election night, and it likely won’t be possible to determine winners in close statewide races on Election Night, either.

I dunno ... I need to see a few more yard signs before I make up my mind.

And at The Onion, mirthful mockery aims at our state:

Michigan Hopes To Increase Voter Turnout By Making It Legal To Cast Ballot By Stepping Outside And Shouting Candidate’s Name https://t.co/vIbvprkPgp pic.twitter.com/VAEZ2Wdb27