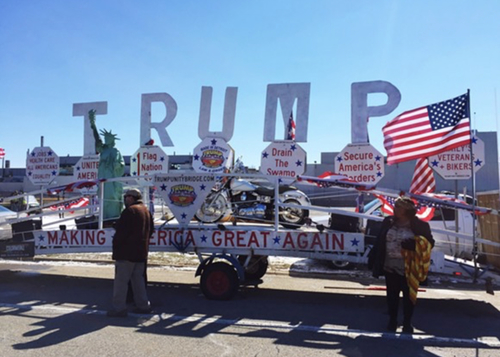 The owner of the Trump Unity Bridge has been arrested at a rally in Detroit and his truck and parade-style float have been impounded.

Video posted to social media shows Rob Cortis, the metro Detroit man who created the bridge, shouting for help as he gets taken away in handcuffs outside another day of protests at the TCF Center, where vote-counting concluded Wednesday.

A tow truck driver is seen driving the vehicle away in another clip after the truck was apparently unable to carry the load.

The driver of the Trump Unity Bridge has just been arrested in Detroit. The bridge is being impounded #Detroit #DetroitProtests pic.twitter.com/JpxpNMsPBU

A Detroit police spokeswoman tells The Detroit News why Cortis was taken into custody:

“He was blocking traffic and playing loud music yesterday, and we gave him a warning," she said. "He was doing the same thing today so we investigated him and found he had an outstanding warrant out of (Canton Township) for disturbing the peace, so he was being arrested for that, and his vehicle was impounded.”

Trump supporters have gathered intermittently outside the former vote-count site with baseless claims of election fraud since Wednesday, when the president lost the state to Joe Biden by about 145,000 votes.

This was the scene early Friday afternoon: