With a life-threatening pandemic again menacing Michigan and the nation, the state's Republican-led legislature took decisive, public-spirited action last weekend: Members went on vacation for the opening of deer-hunting season.

Why worry about sick and dying citizens when you've got a yearly chance to kill animals? 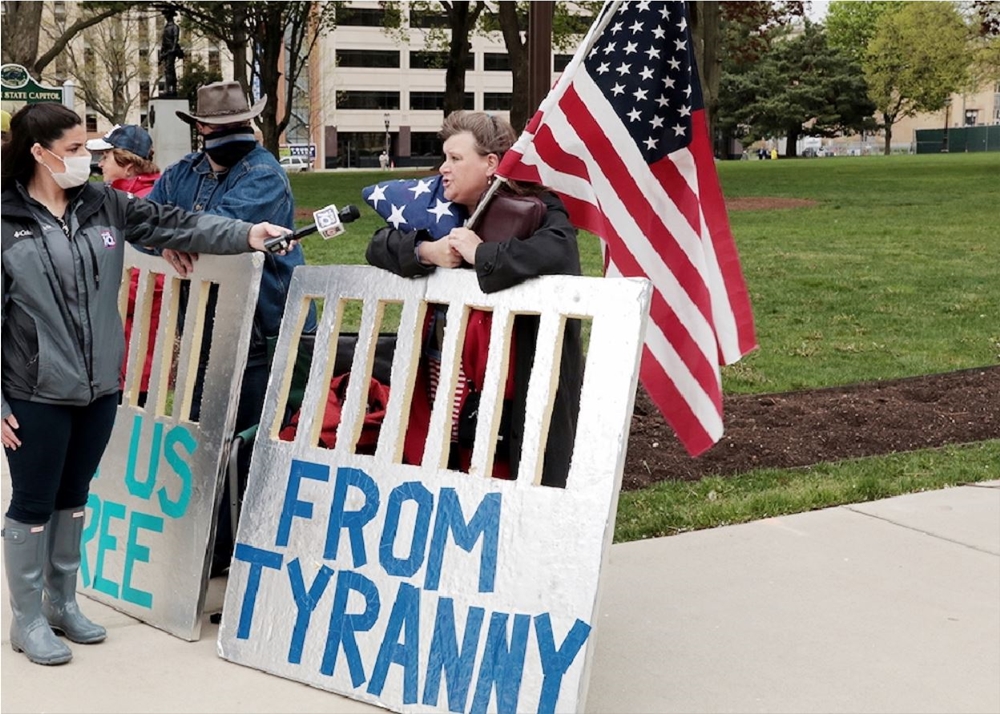 May protest outside the state Capitol. (Photo: Michael Lucido)

"They won’t do a mask mandate. They can't even wear masks themselves and they got Covid spreading through the Republican caucuses in both the Senate and the House."

One brave rookie Republican representative – Matt Maddock of Milford Township -- poked his head through the trees, put down his gun and spouted a bold proclamation. He wrote on Twitter and Facebook Sunday night that Whitmer should be impeached because she "crossed the line" by not taking orders from people like him.

"She has committed the following impeachable conduct," Maddock wrote, listing what he called the violation of Constitutional rights, the ignoring of the legislature and the courts and the use of children as political pawns.

He also blamed Whitmer for "causing the unnecessary deaths of thousands of our vulnerable elderly who died alone and scared in nursing homes."

His social media spew came hours after a sinister attack from Dr. Scott Atlas, who President Donald Trump inexplicably turns to for advice on coronavirus – a plague far from this radiologist's expertise.

Atlas reacted with sharp hostility after Whitmer and Michigan’s Department of Health and Human Services announced renewed restrictions on gatherings and commerce that begin Wednesday and last at least three weeks.

Colleges and high schools will shut. So will bars and casinos. This displeases Trump's current Rasputin.

“The only way this stops is if people rise up,” Dr. Atlas tweeted Sunday. “You get what you accept.” 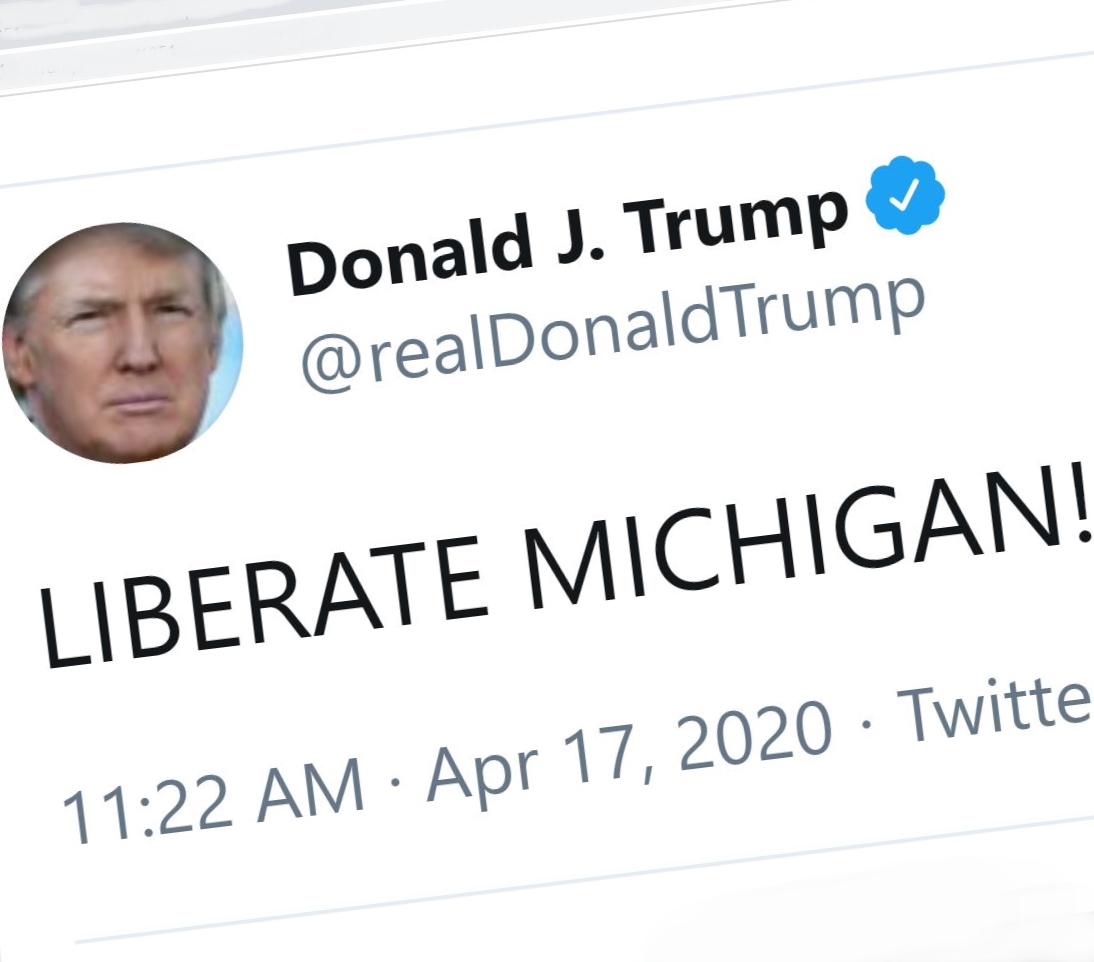 The threat was similar to Trump’s “LIBERATE MICHIGAN” tweet in April, back when guys with guns visited Michigan’s Capitol to protest the closing of businesses, the wearing of masks and other orders from Whitmer to stop the spread of the disease.

And Atlas’ attack came just weeks after 14 local crackpots were busted for a plot to kidnap the governor, try her for treason in their kangaroo court and, possibly, put her to death on live TV in the manner of ISIS terrorists.

Atlas' tweet was tone-deaf by even the low standards of the Trump White House, as even he seemed to realize. The doctor later wrote: “Hey, I NEVER was talking at all about violence . . .  NEVER would I endorse or incite violence. NEVER!!”

Historians of the future will forever ponder why Trump – while unsuccessfully running for reelection – turned a public health crisis into a partisan political issue and forced people to take sides.

In what amounts to a death wish in the Jonestown tradition, many of his cult members still refuse to wear face masks even though they are proven to slow the disease's spread.

Trumpists insist that covering their mouth and nose is a personal decision, depending on how they feel about their "rights" and "freedom" to contaminate fellow citizens with potentially deadly germs.

A Michigan Supreme Court ruling last month trimmed the governor’s powers for pandemic policy-making without the legislature. But with no Republicans around, Whitmer found a way around it through the health department.

And don’t expect any courageous moves from the Legislature when it returns after Thanksgiving. Maybe it's better that they don’t make decisions.

“There are also concerns in the House GOP caucus that at a large, post-election party last Saturday at the home of Rep. Gary Eisen more lawmakers may have [had] contact with the virus.“

These are the same wise leaders who are afraid to ban the open carry of rifles in the balconies above their heads. 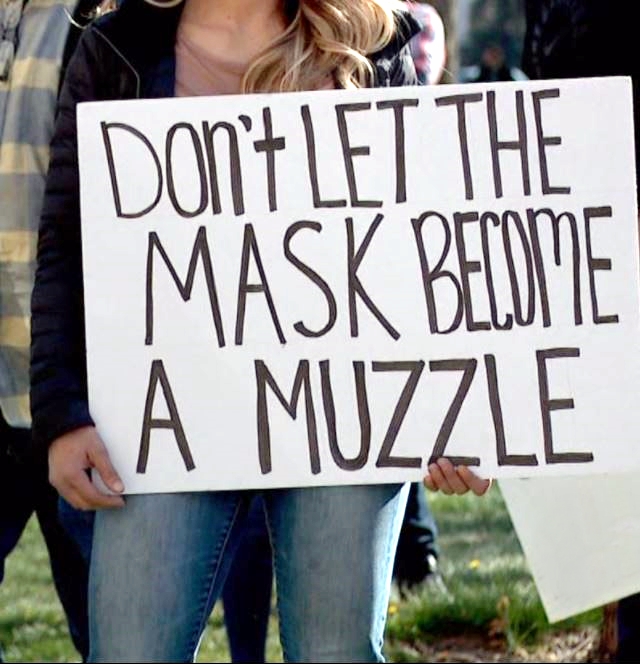 It's not just a Michigan thiong, this Utah sign shows. (Photo: KUTV)

Thanks to Republican gerrymandering, the majority of legislative power in Michigan is controlled by a minority of the voters who sometimes elect small minds from small towns.

And with Thanksgiving and Christmas coming up, plenty of Michigan Trumpists will ignore the warnings and socialize as much as they darn well please.

After all, they have “pandemic fatigue.” They're sick and tired of elitists telling them how to run their lives! So what if 55 more Michiganders died Sunday and Monday to bring the state death total to 8,049? It’s all just a liberal hoax!

Trump’s troops carry an attitude much like that of those who refuse to vaccinate children against common, contagious diseases.

And with two new Covid-19 vaccines possibly available in the coming weeks, will anti-vax people cooperate and get vaccinated or continue to put others at risk?

Should Trump announce tomorrow at a rally that he would serve his followers Kool-Aid as his going-away toast, they would rush toward him – no masks, no social distance – and squeal with glee: “What flavor, sir?”

Reflecting Monday on charlatans like Trump and Atlas, President-elect Joe Biden said: “What the hell’s the matter with these guys?”

You can ask the same thing about Re[p. Maddock and Michigan’s Republican legislators, who should – as Thomas Paine long ago put it – “lead, follow or get out of the way.”