2019 Recap -- Gallery: At Jobbie Nooner, a different kind of Pure Michigan than in the ads 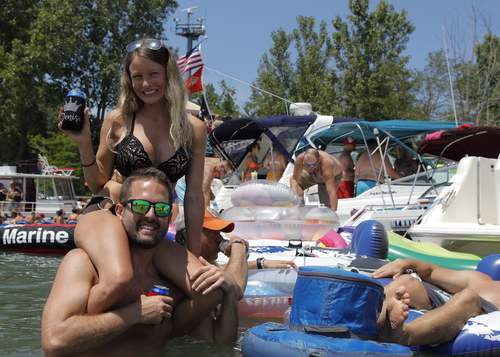 Will this Jobbie look like the last? (Photo: Michael Lucido)

This repost from June 29 is the midway point in our Top 10 countdown of popular 2019 articles, a daily series through New Year’s Eve. Choices are based on readership and staff selections. Links to earlier installments are at the end.

Thousands attend Jobbie Nooner, Macomb County’s boozy boat party in Lake St. Clair, every year, but thousands more don’t. What’s it like? you might wonder. Is it as crazy as I’ve heard?

To answer that question, you must first think of a bar.

A particular bar, but really a club -- you’ve been there. It’s the third and final stop on a Saturday night with your friends when you’re all roughly 25. The music is thunderous; the bartenders risk hearing loss night after night to serve fruity drinks to young women and beers to young men. At least one girl is crying in the bathroom while her boyfriend texts her on a phone with 1 percent power. The Uber drivers who carry away the worst of the lot at closing time stock barf bags in the back seat.

The origin story of Jobbie Nooner is pretty well known by now, but here’s the short version: A bunch of auto workers, playing hooky from the job on a beautiful early-summer day, motored out to Strawberry Island, up in Muscamoot Bay, and had themselves a party. It was a pretty good one, and the next year, they did it again.

This was 1974. Forty-five years later, it has grown into something far bigger than the original 17 guys who made the first run across the water. Thousands participate every year, rafting up their boats in lines that circle Gull Island, the party’s home since 1987, when it really started to explode in popularity. Today, businesses sponsor party boats. Planes tow advertising banners for auto-parts stores. TV stations send choppers to hover over the arriving crowds. It is a legit scene – the Mardi Gras of the Midwest, some call it, if you swapped the Dixieland music for a cacophony of competing playlists that sounds like the stuff the Army Rangers play to drive dictators out of their hiding places.

The last Friday in June, Jobbie’s official date, was a mixed bag this year. On the one hand, bright sun and hot temperatures made it a perfect day to hang out on the water. On the other, there was so much water; high lake levels covered the sandbars of Gull Island, which probably spared a few boat propellers but made for a less hospitable boat-to-boat socializing  environment. There was little of the ankle-deep splashing you might have seen in photos from past years; 2019 Jobbie partiers waded in water up to their armpits, which made the scene look like a cross between an aquatic strip club and the Normandy invasion.

Deadline Detroit’s ride to Gull Island was an inside job; Michael Lucido, Deadline’s photographer/videographer/audio engineer, lives on a canal in St. Clair Shores, and out back sits a Wellcraft speedboat, roughly 28 feet long, red with black trim -- Deadline’s own colors.

The morning haze was still on the water as we left the canal and turned northeast.

“Do you have a chart?” I asked. Michael chuckled and explained we would figure it out, and soon it was obvious why -- boat traffic was converging from all directions. All we had to do was follow them in. Soon there it was, a watery Brigadoon materializing out of the mist, and then we could hear it, an amplified voice crossing the water:

BACK THAT AZZ UP.

Michael and his friends who came along are Jobbie veterans, and swapped stories of the commonplace depravity they’d seen as we slowly motored into the throng. There would be lots of bare breasts, and maybe, if we were lucky, the guy who one year had enthusiastic doggie-style sex with his girlfriend right out in the open might do an encore. I don’t get many chances to visit either Sodom or Gomorrah these days. Everything sounded very promising.

We opted for a spot on the north side of the island, so we could get out in a hurry if we wanted to. The big boats were already rafting up on the south, where the Tiki Barge and another DJ setup blasted hip-hop at top volume. We ended up facing a lineup of partiers who formed their own raft line of about a dozen boats and were pumping their own hip-hop mixes, while the women took turns energetically twerking on the stern.

(Backing that azz up is pretty much what young women do these days. If you regularly go to nightclubs, this probably isn’t a surprise, but just in case you don’t? Even basic girls who look like they’re studying to be registered nurses now blithely stick their butts out and shake ‘em like Cardi B, while guys watch like dogs fixated on a squirrel through the picture window.)

The place was swarming with police, who told The Macomb Daily they were “concerned about drownings.” A Coast Guard cutter, Bristol Bay, sat at anchor as a mobile command center, and smaller police boats and personal watercraft patrolled constantly, but no one was boarded or arrested that we saw.

With the high water, the aisle between the first and second row of boats, aka “the Gauntlet,” was more a parade of floaties, most holding a young woman, pushed along by a man, like Roman servants carrying the nobility on litters. An inflatable unicorn passed slowly, with four lovely young women aboard arranged as though for a portrait, all mouthing Kanye lyrics: You’re such a fucking hoe / I love it.

A pontoon with a tiki-style awning bore a sign identifying it as the Titty Glitter. Women climbed to the roof to gyrate on a pole/railing, either before or after they had them -- or their backed-up azzes -- caked with glitter by the crew.

Maybe it was too early, but there wasn’t a bare breast to be seen, let alone public sex. And to be sure, any man who went in the 60-degree water would need a long break in the sun before he was capable of much; as one of Michael’s friends said, “My nuts are in the middle of my chest right now. Vibrating. Saying, ‘Save us.’”

Michael was tired from carrying his camera like a Marine hoisting his rifle during a beach landing, and climbed aboard a friend’s boat. You get the impression Jobbie is kind of like an unofficial high-school reunion for young Macomb adults. At the waterline of the swimming platform was a notice: If you can read this there’s room for one more fat chick.

After a few hours of this, clouds began to bulk on the western horizon. It was time to go before the threatened storm came through, and anyway, some redneck nearby was counterprogramming the hip-hop with modern country, which sucks. We pulled the anchor and made our way slowly past the twerking girls, who were pushing one another into the water, past the Bristol Bay, past the Gauntlet. In clear water, Michael pushed the throttle forward and took a heading on the 9 Mile tower, the RenCen and Detroit skyline dimly visible, far to the south.

You should go next year, if you get the chance and the weather is nice. Stay away from the tequila and Fireball. And use sunblock. Nothing lasts for 45 years if it’s not a good time, and Jobbie Nooner absolutely is. 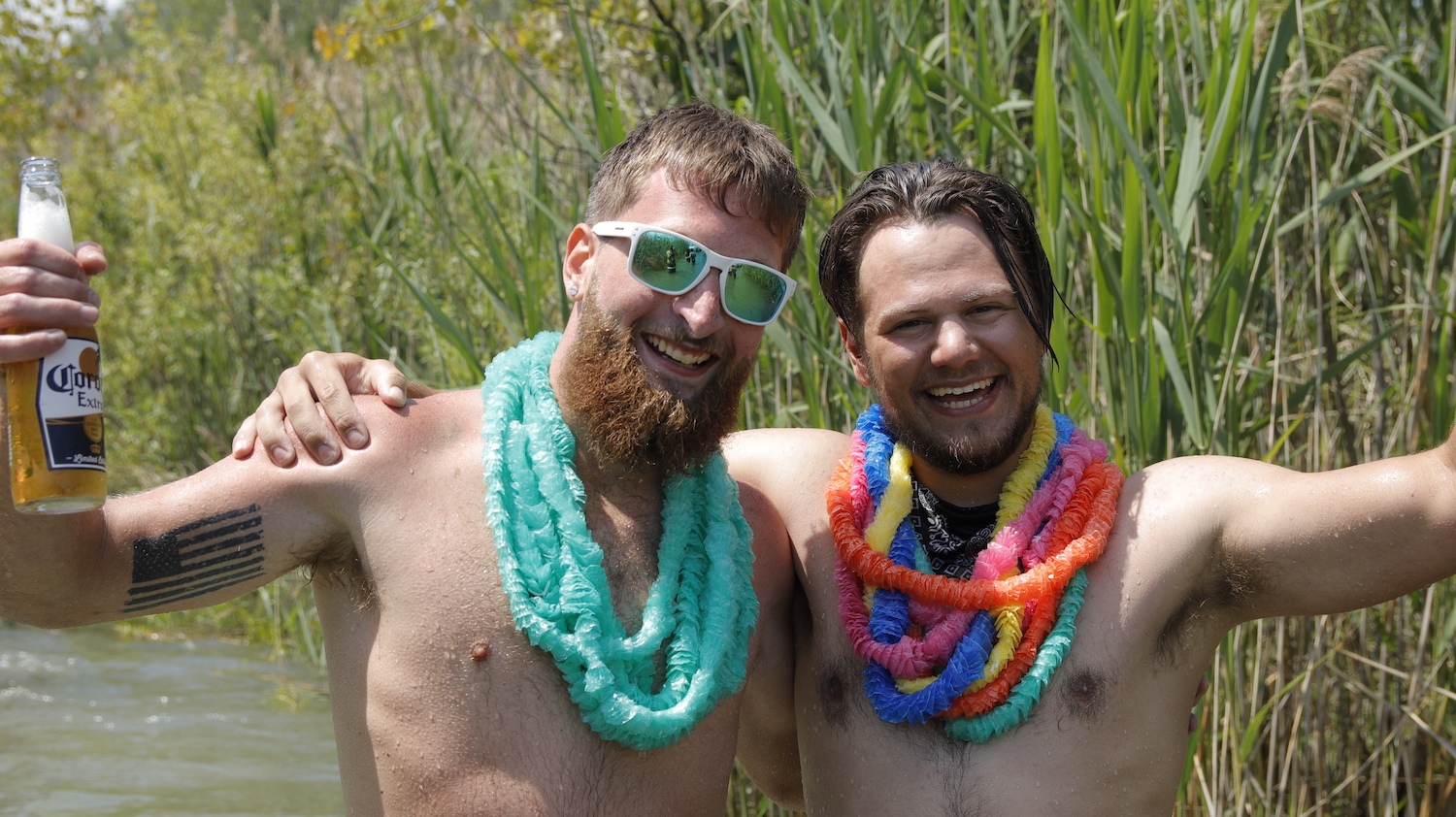 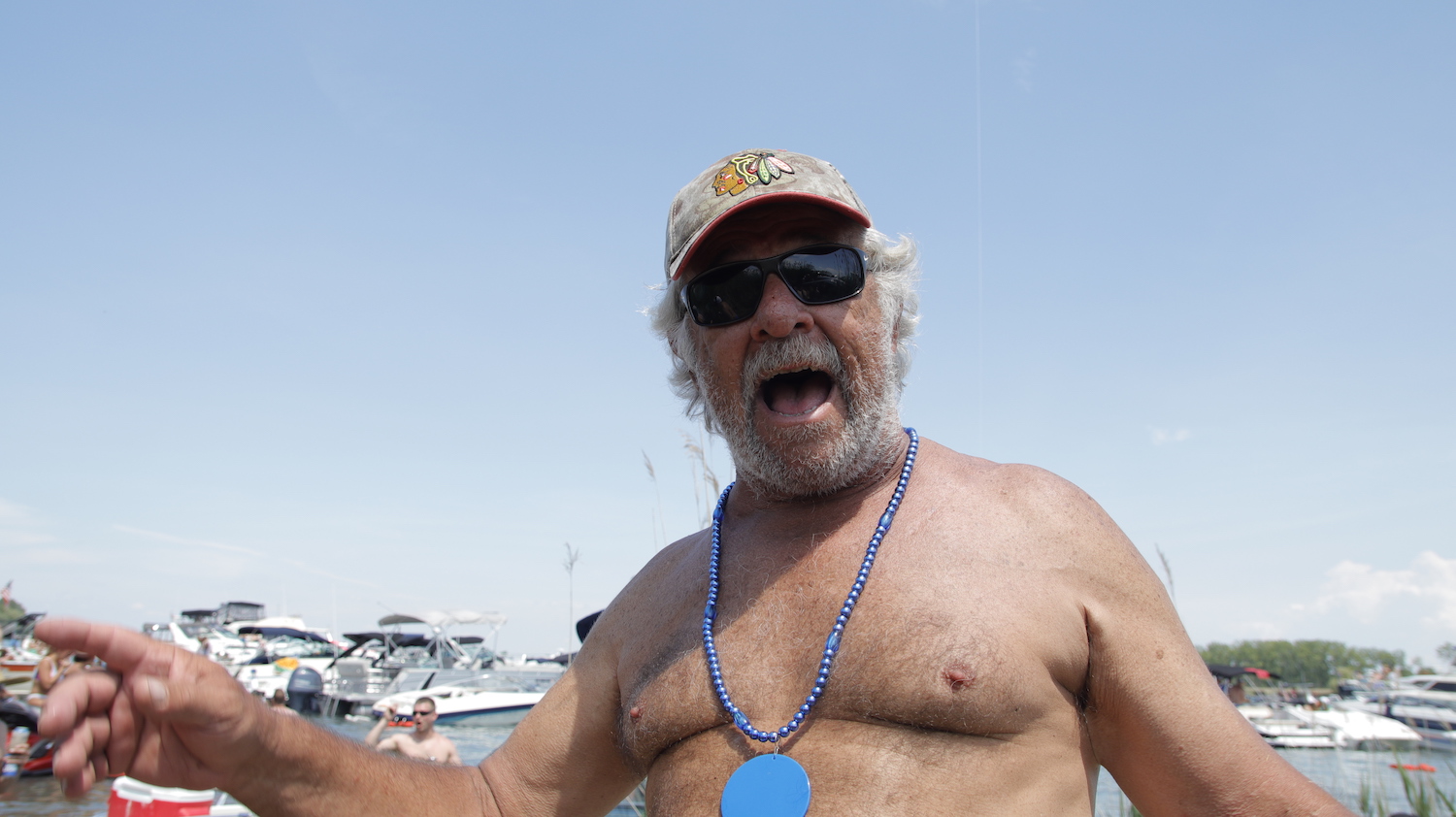 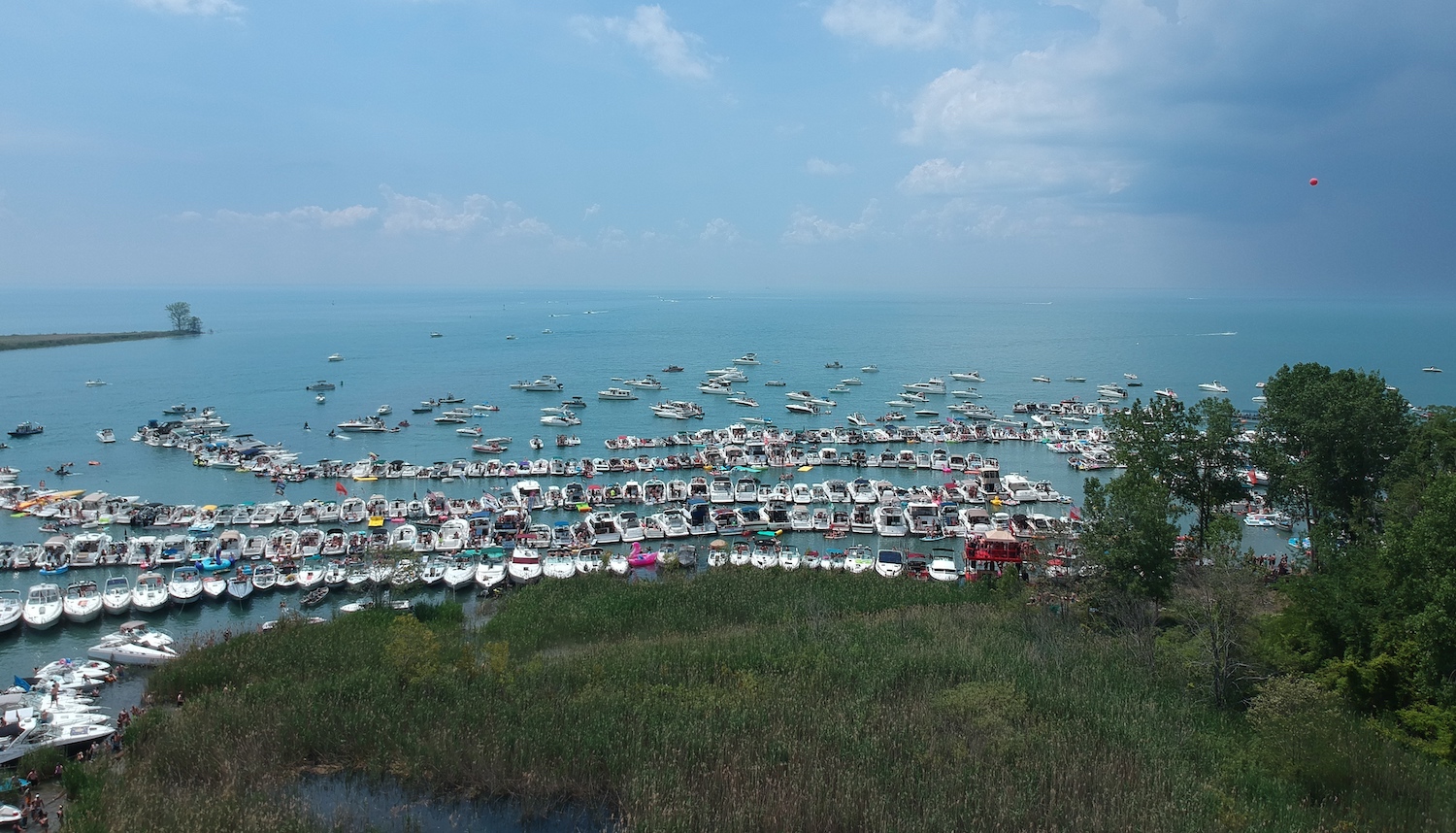 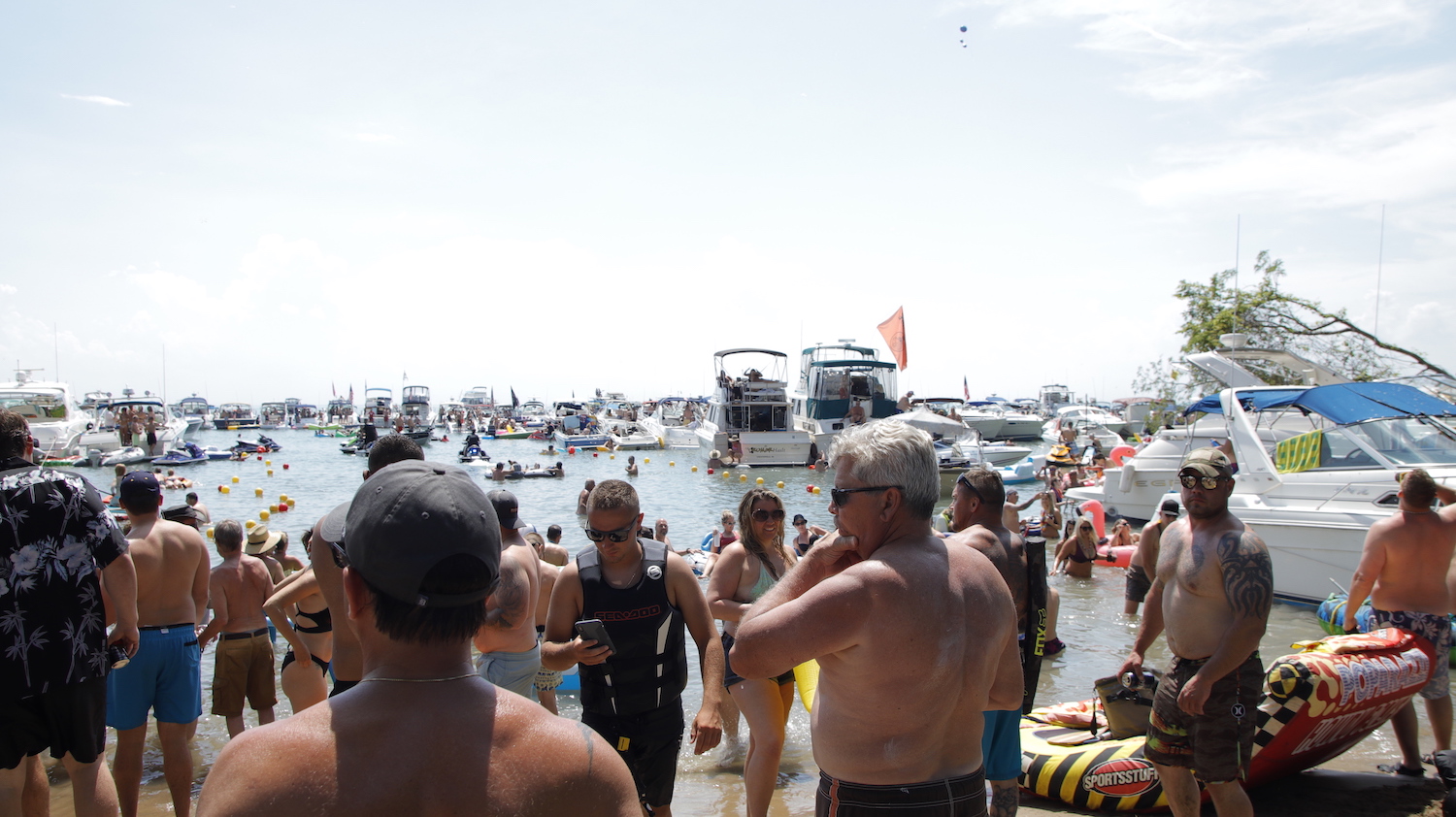 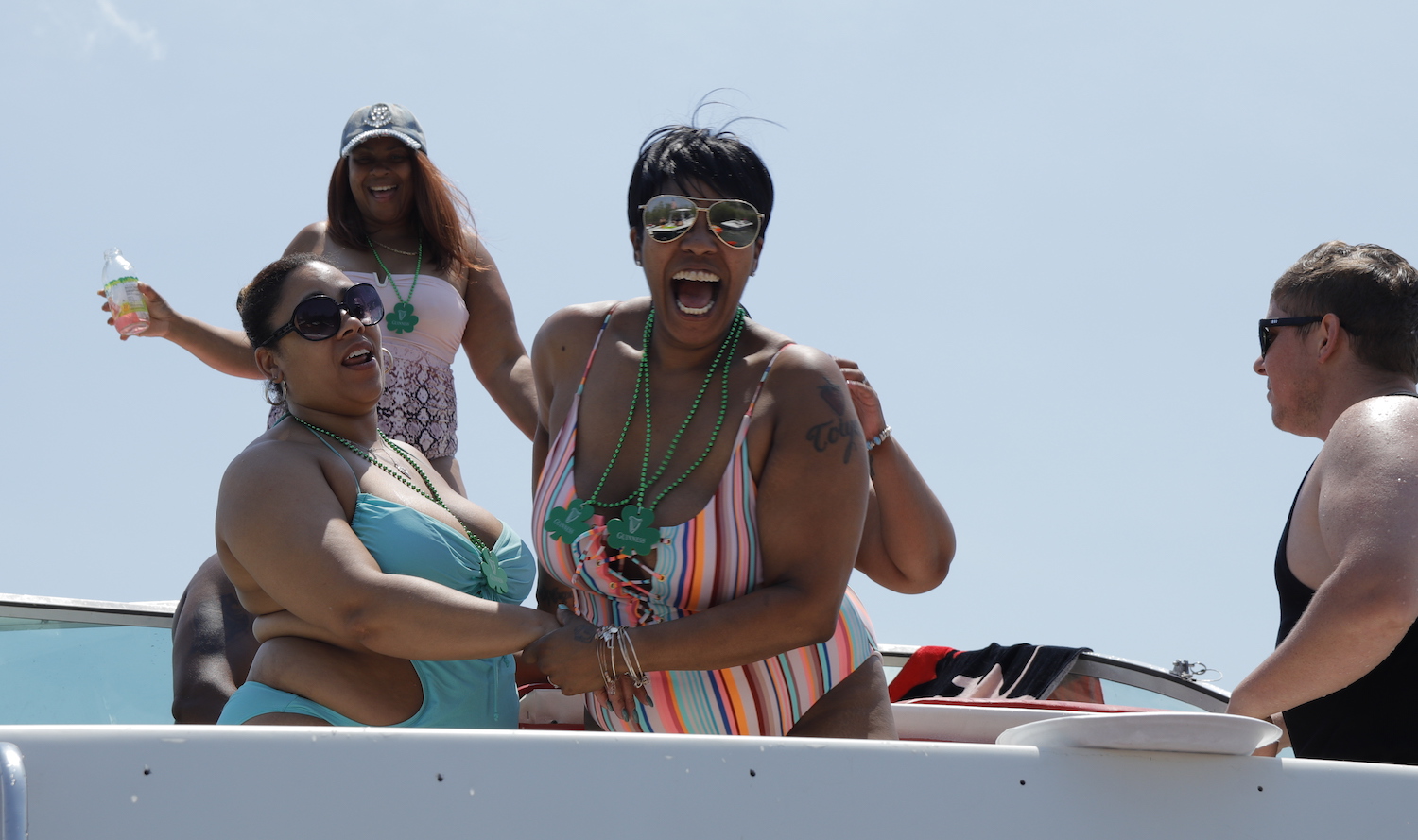 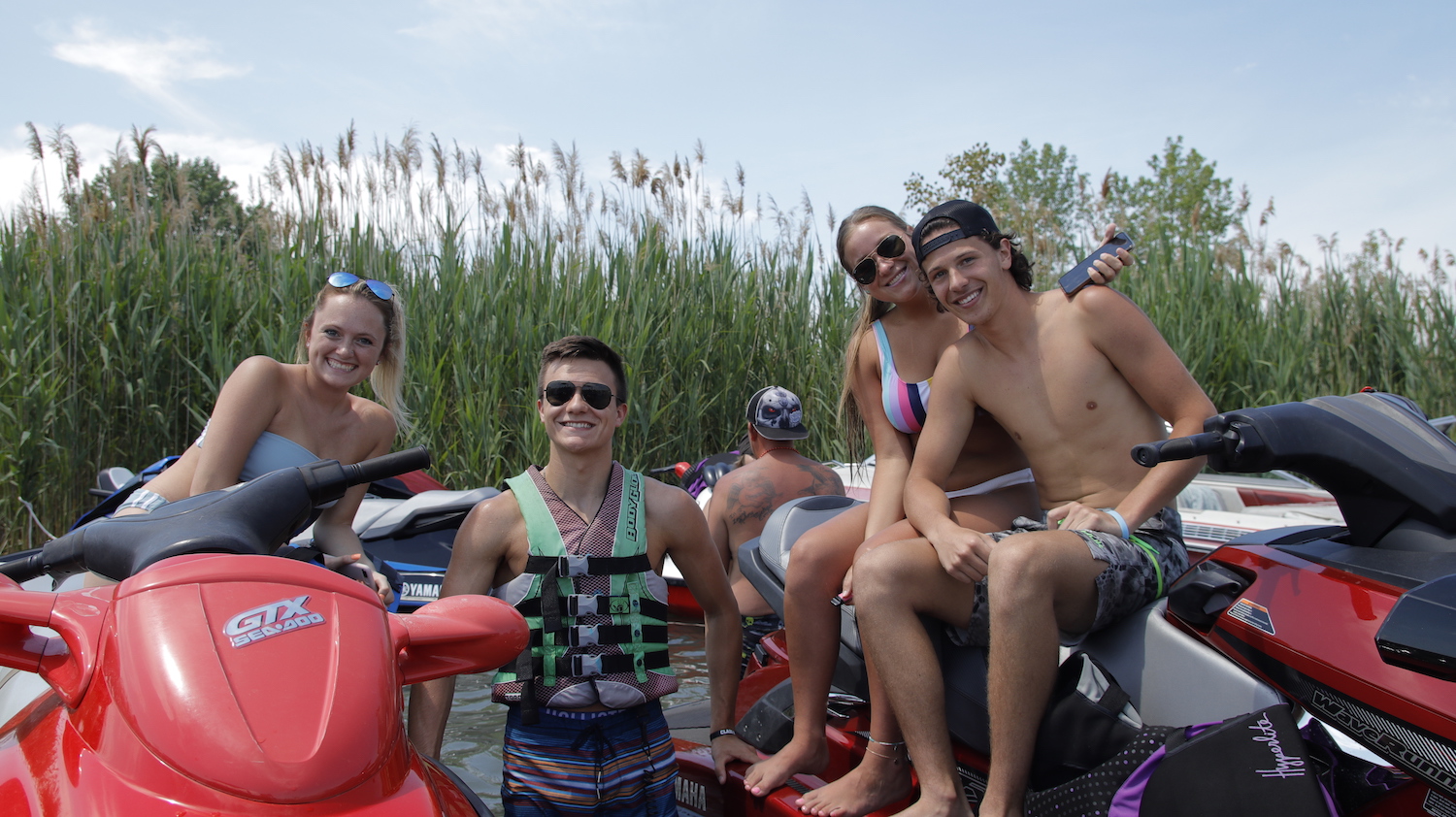 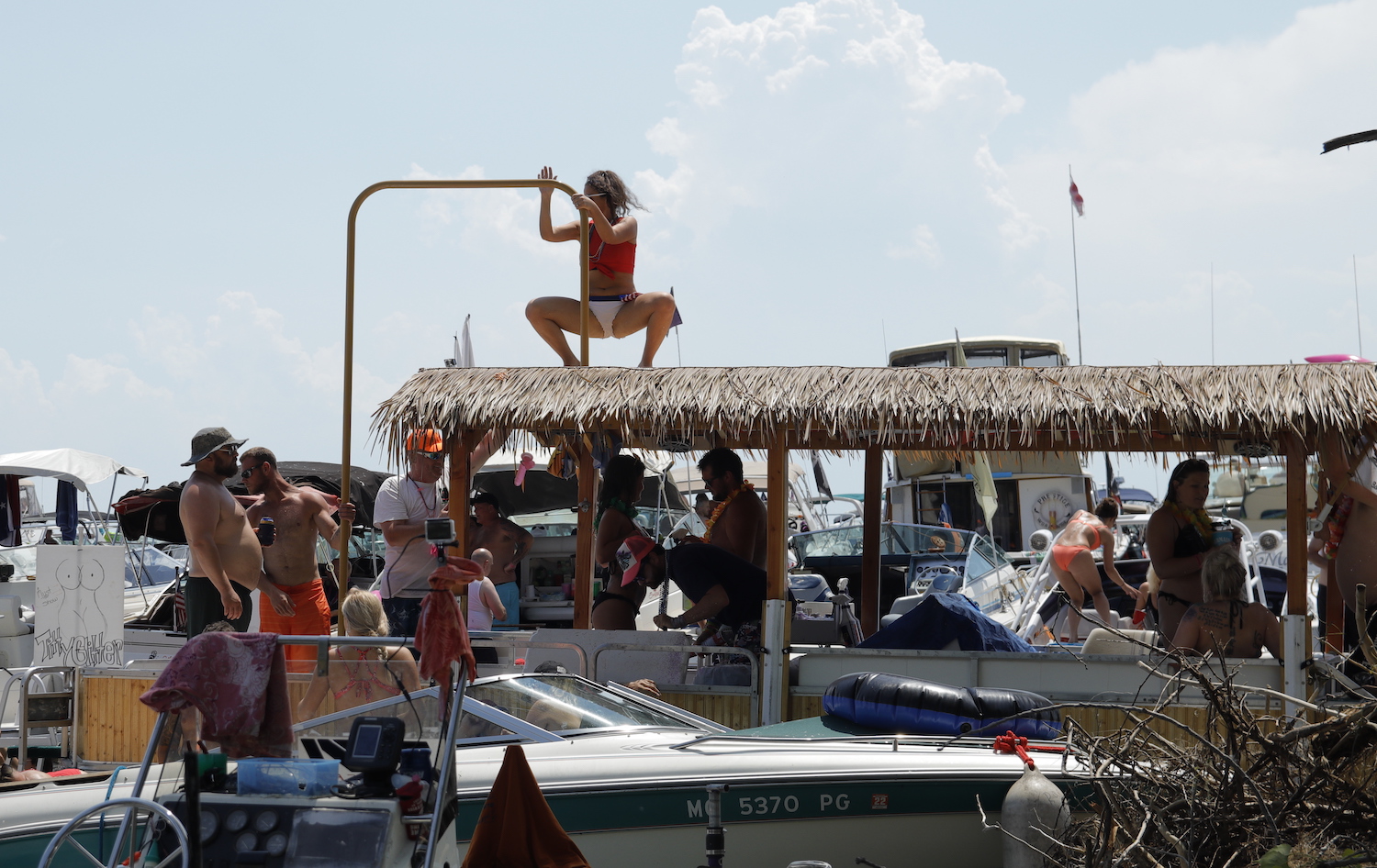 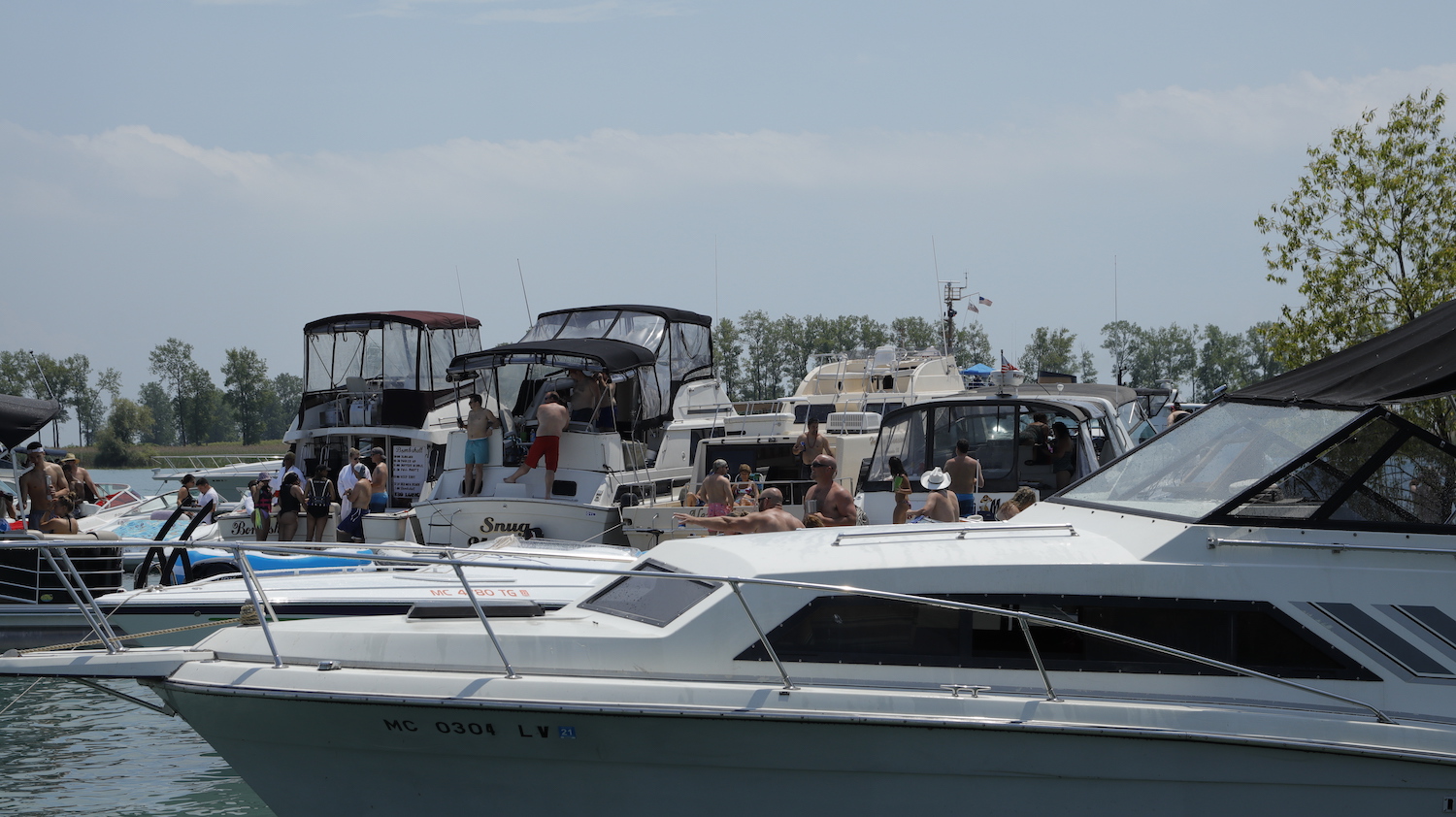 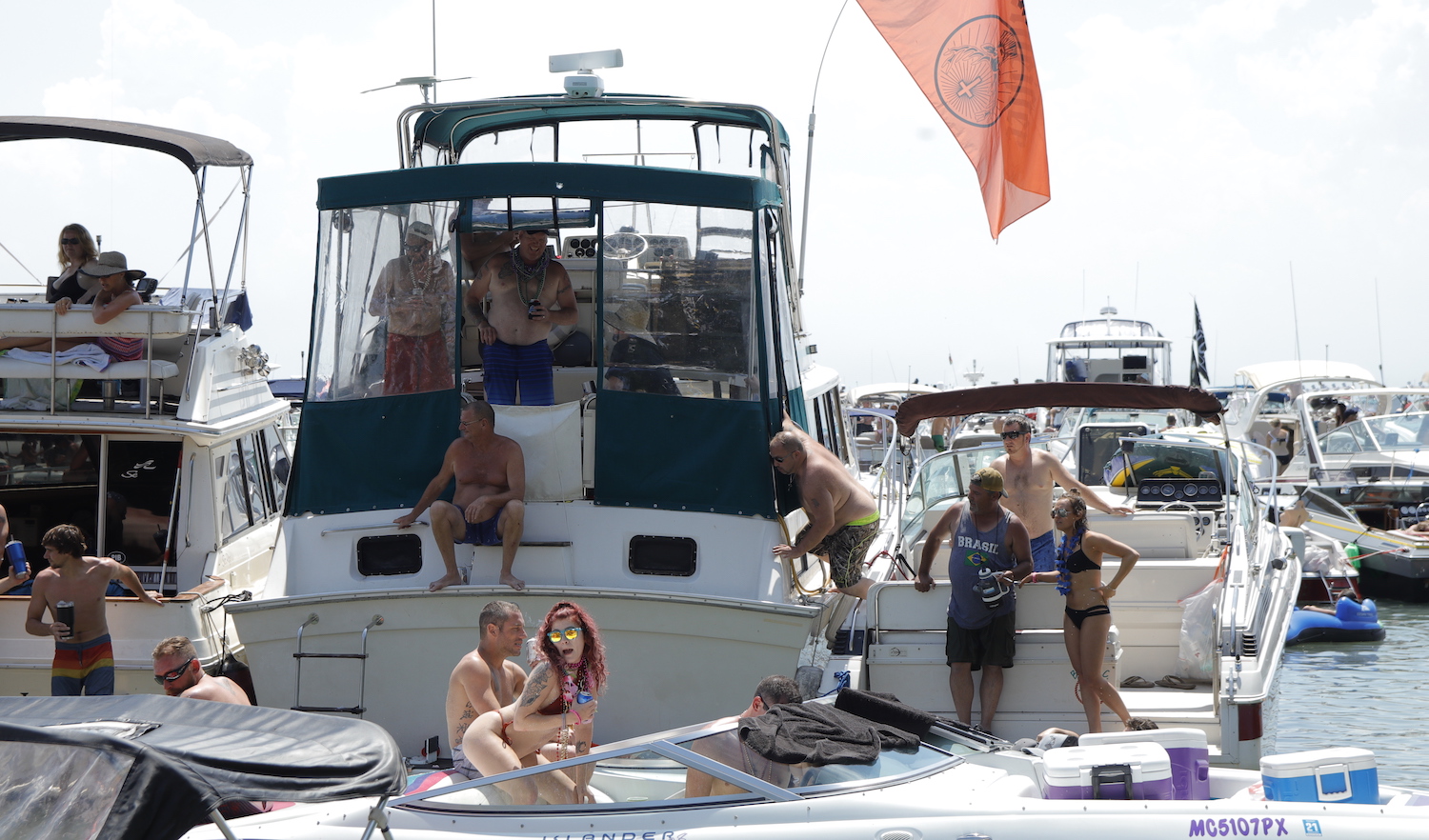 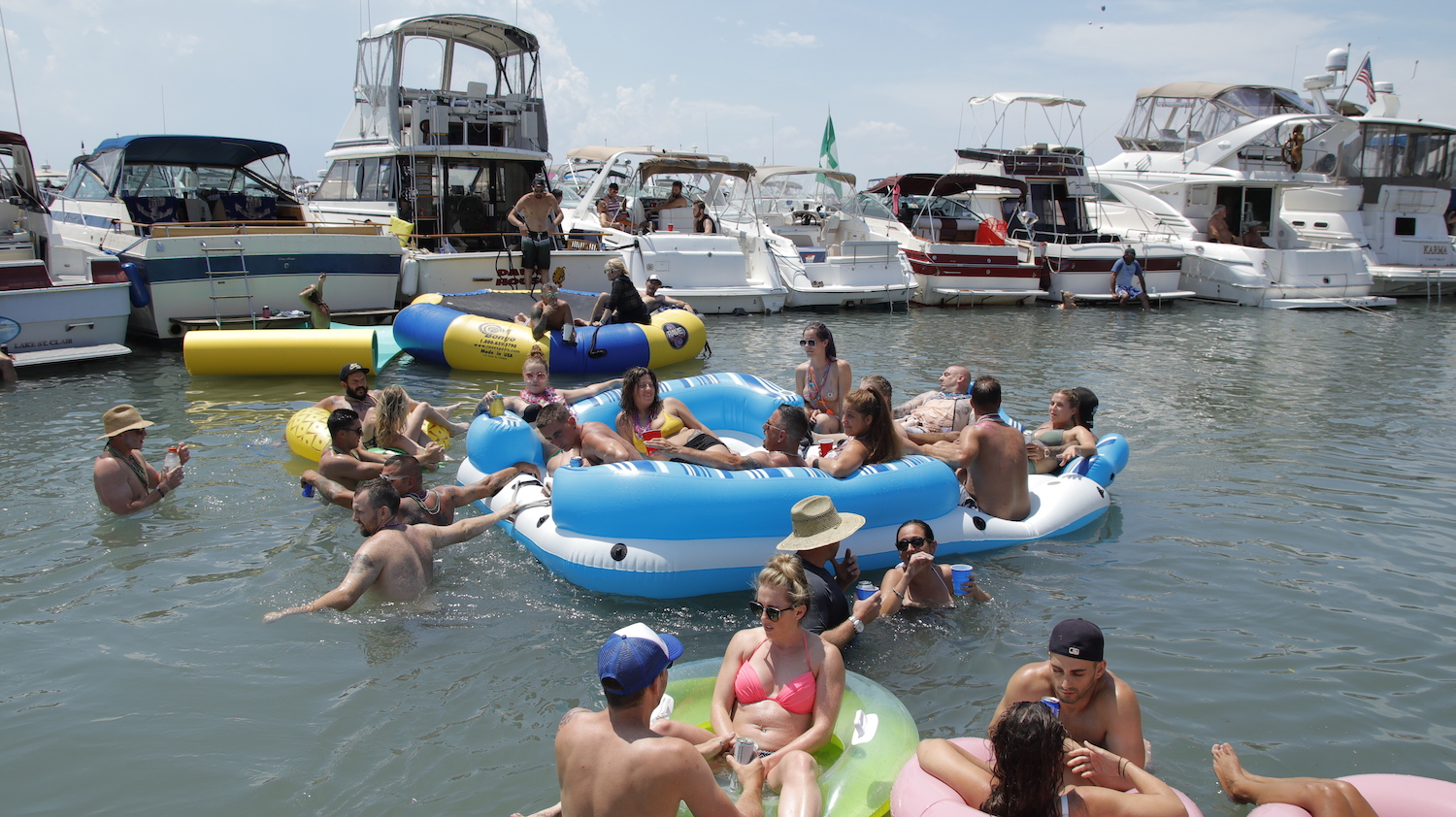 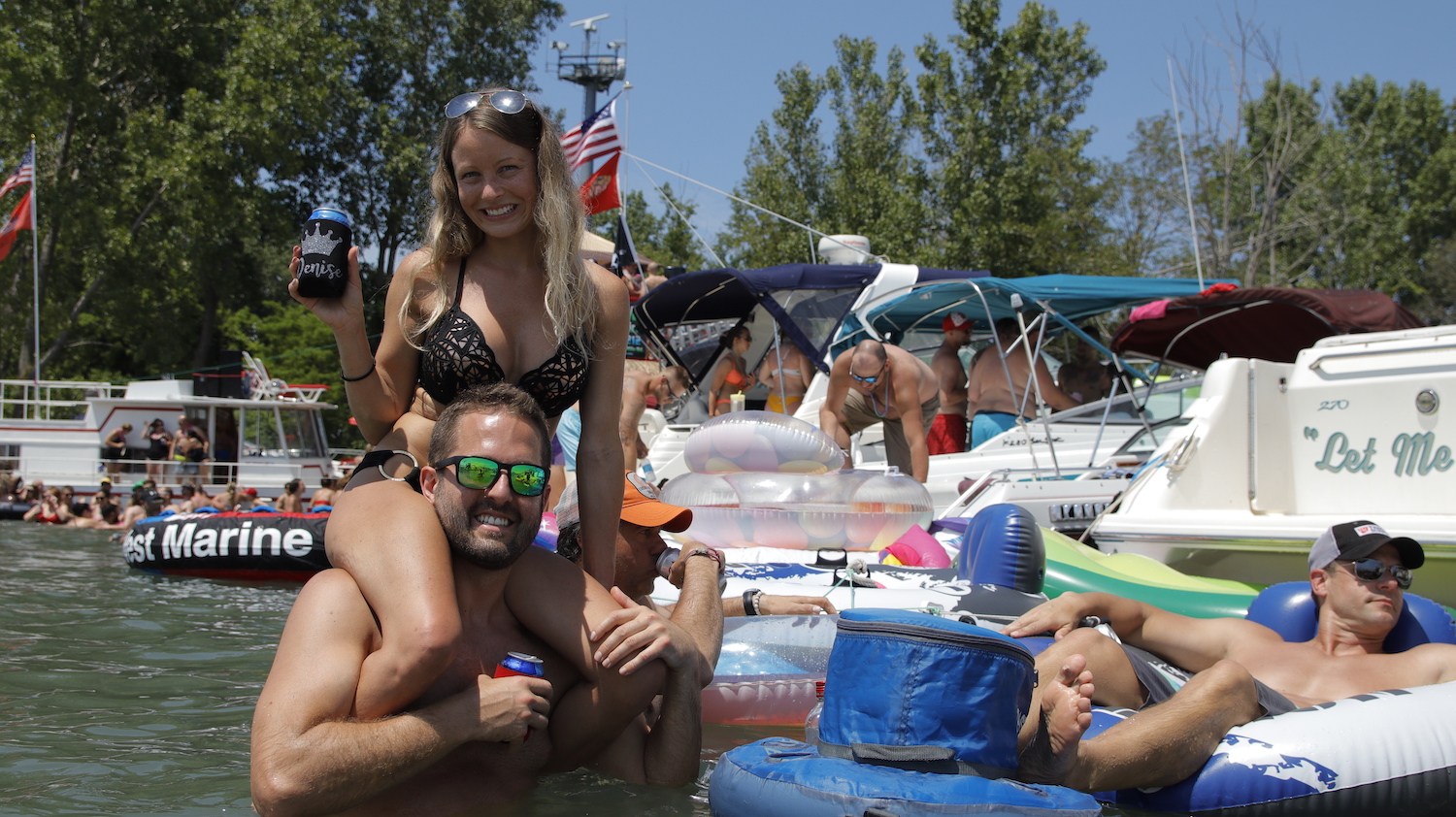 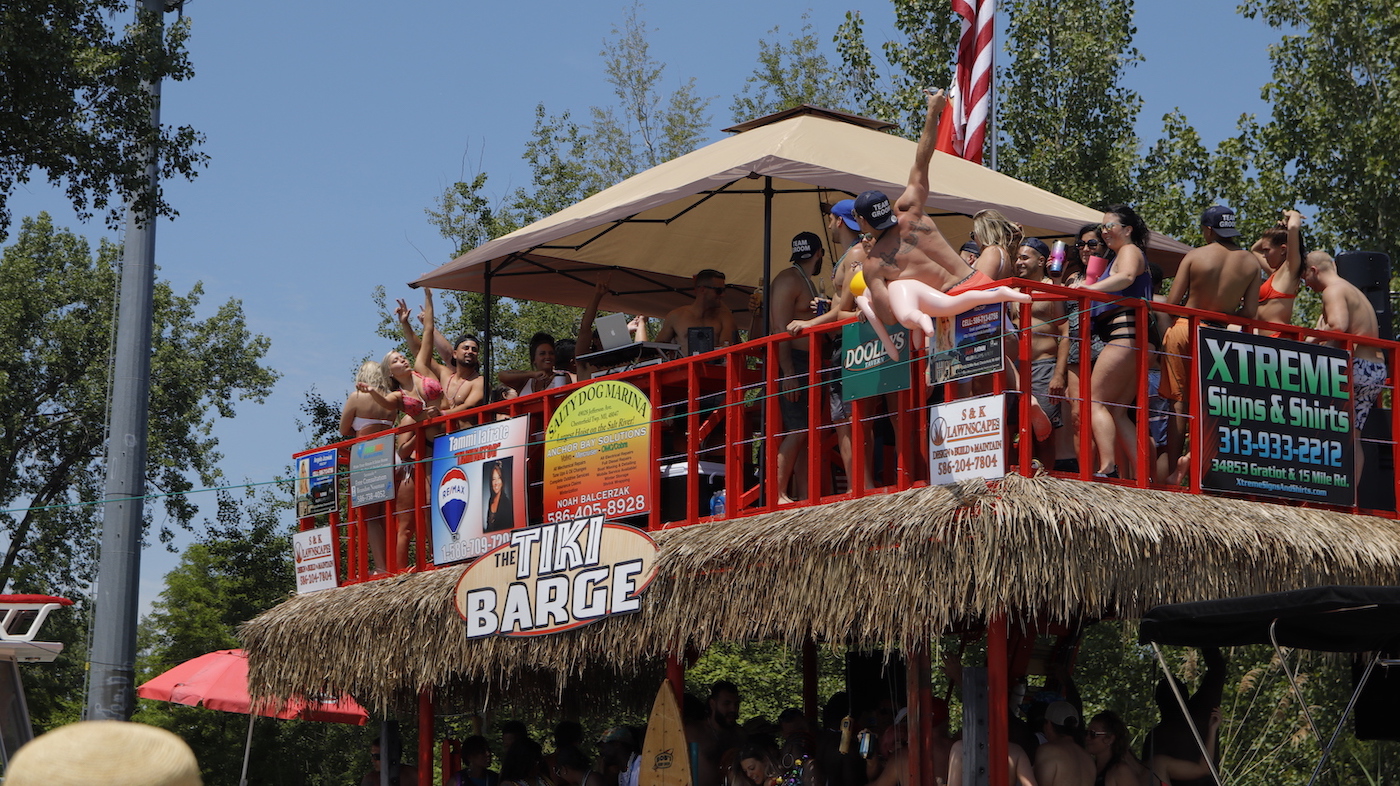 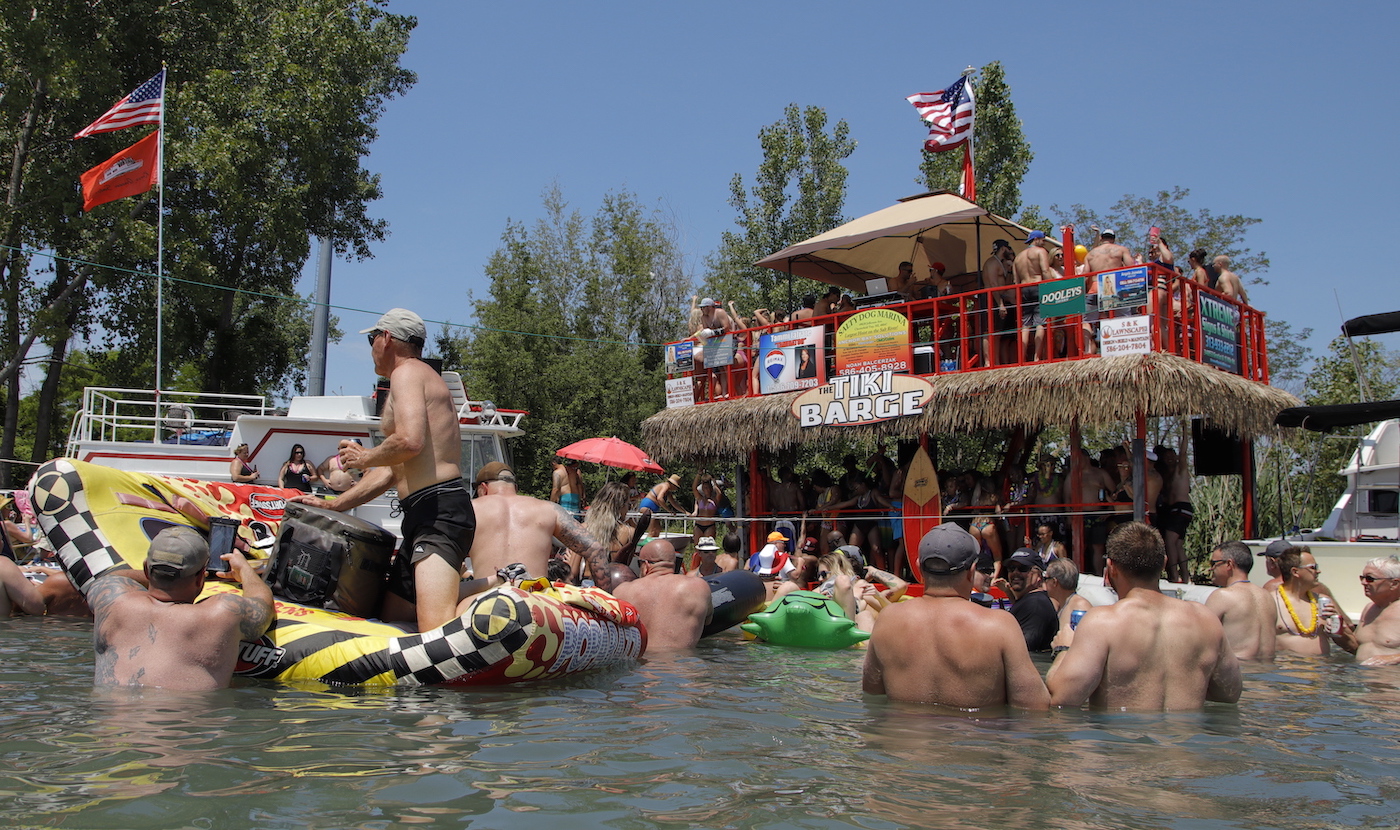 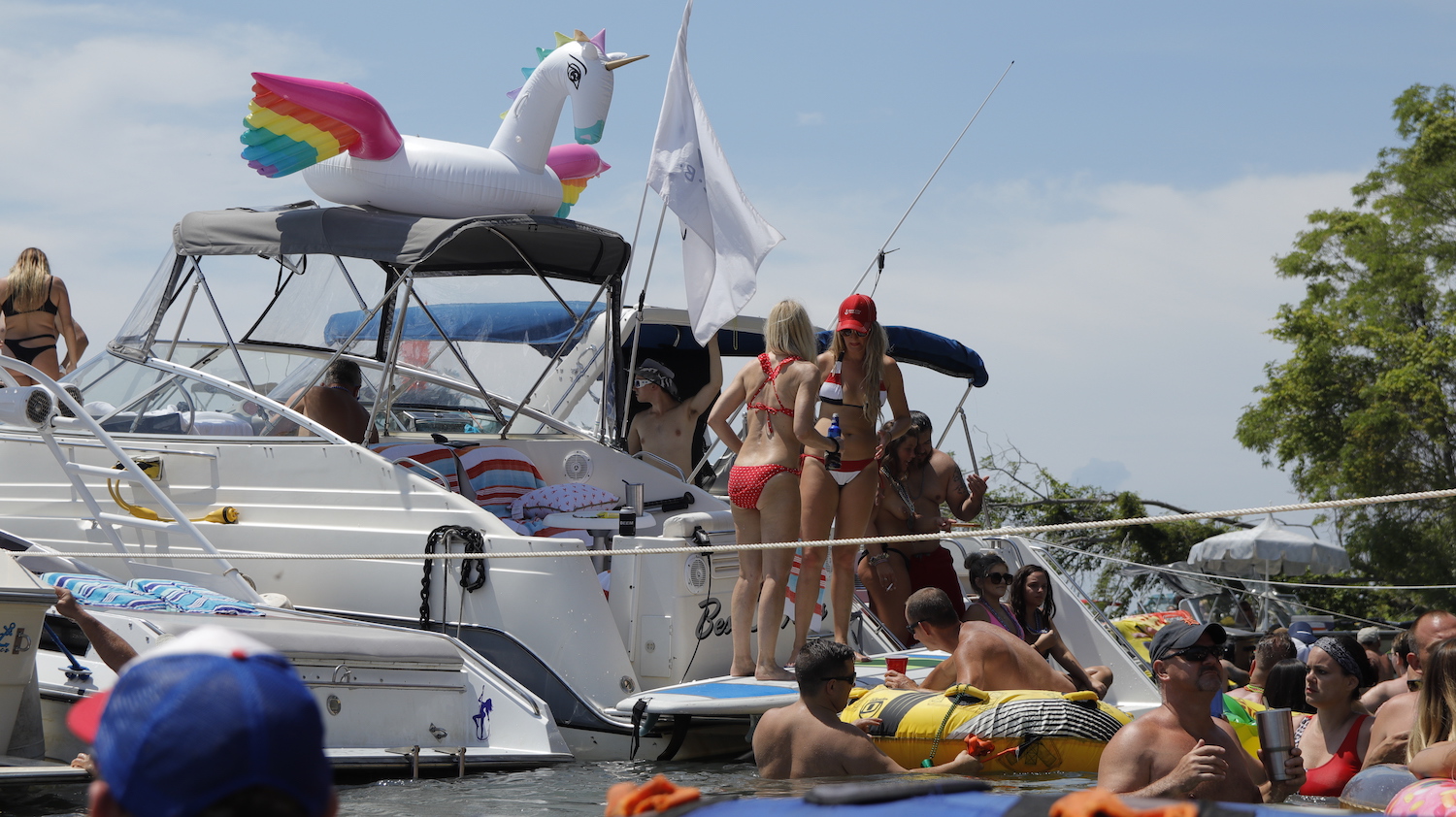 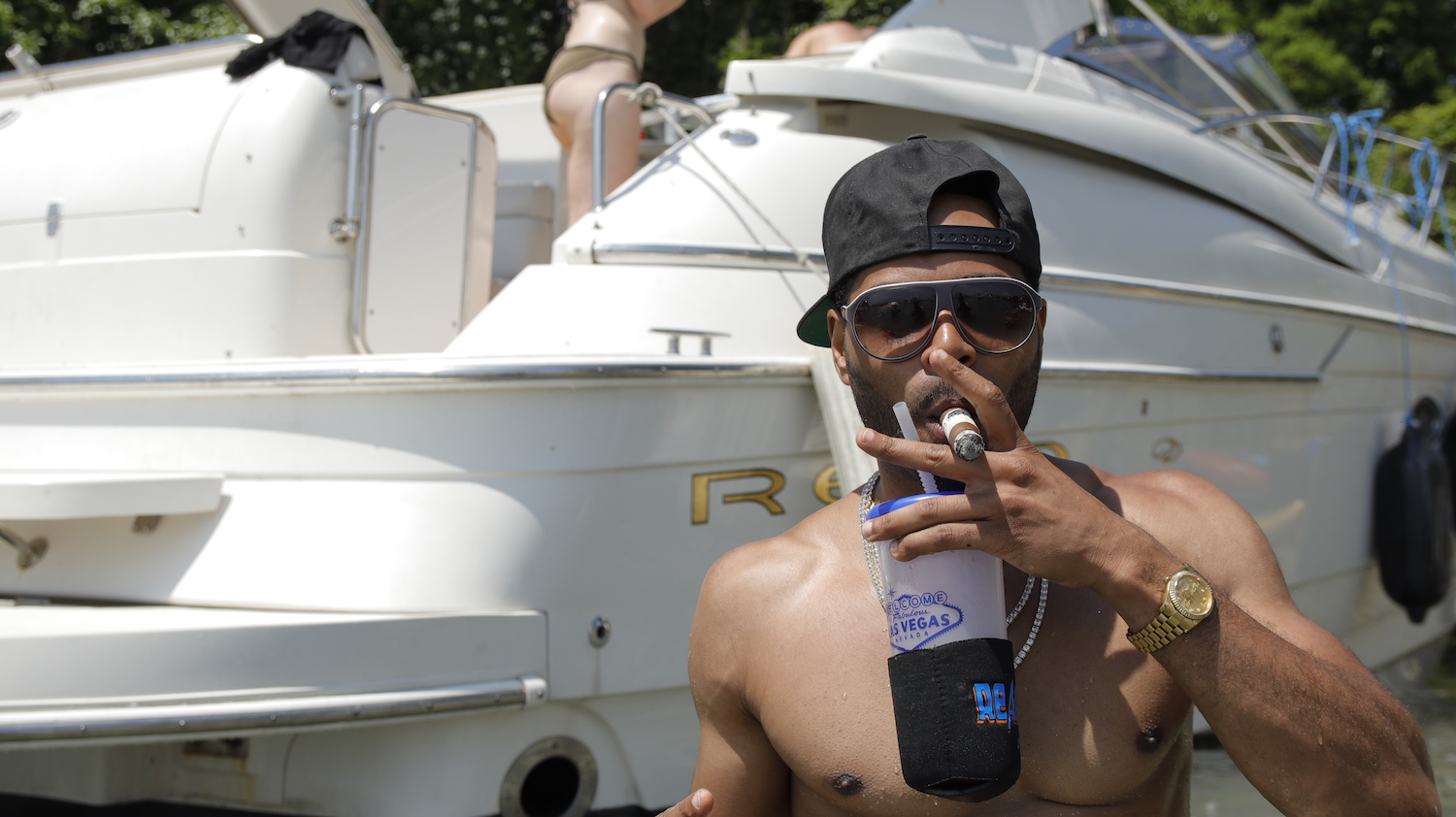