Starkman: The Dangerous Hell of Employees on the Sinking S.S. Beaumont

Spare Beaumont Health’s hospital workers all that fake appreciation and stop calling them “heroes” for risking their lives to treat Covid-19 patients. Heroes are celebrated, not thrown to the curb.

For weeks, brave and conscientious doctors, nurses and other health care providers at Beaumont Health have reached out to me warning that CEO John Fox and COO Carolyn Wilson have so extensively harmed Michigan’s biggest hospital network that patient care is at risk. The drumbeats have gotten louder in recent days, and an incident at Beaumont Troy Friday night makes clear that employees have reached their breaking points.

Overwhelmed with stress and fed up with being stretched beyond the brink because of layoffs and firings, a nurse working in Troy’s emergency department let his colleagues know he’d had enough and copied hospital staff on his resignation notice to his boss, Leigh Grzywacz. Insiders speculate that Beaumont’s IT department removed the email from mailboxes of all recipients, but an employee wise to management’s Big Brother ways took a screenshot first. 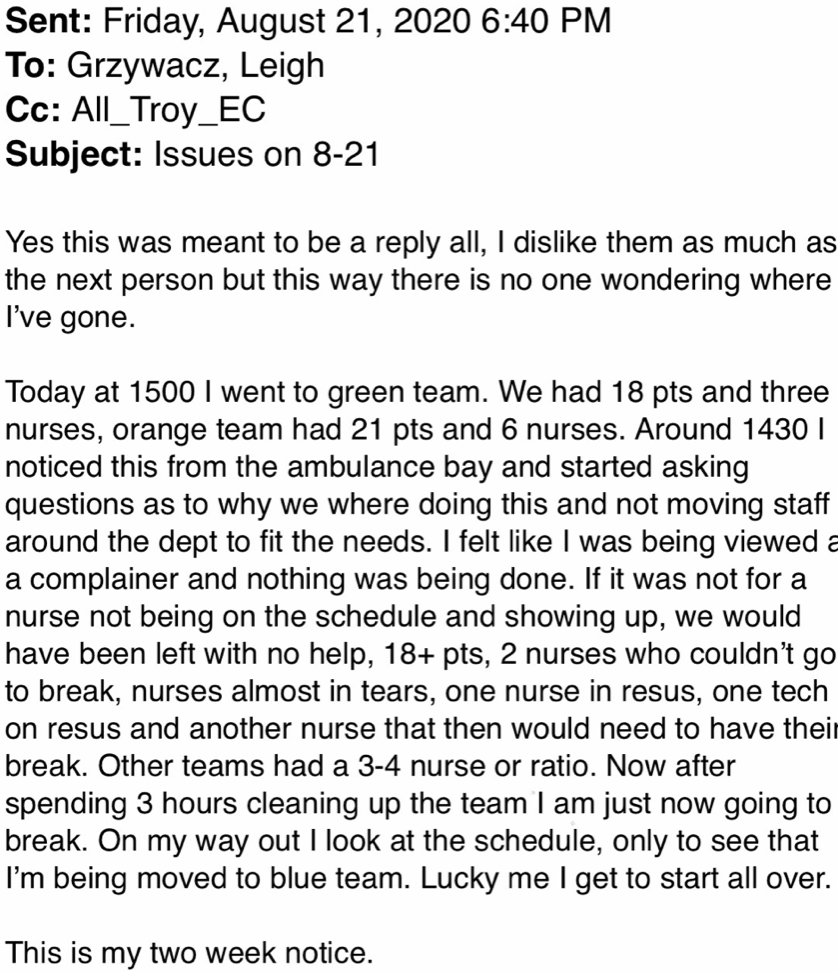 The email from the anonymous person who shared the screenshot included this message, variations of which I’ve been hearing for weeks:

“Someone is going to die on the floor. Mistakes are going to be made. There are too many patients and not enough staff.”

Beaumont is in a free-fall. More than a dozen prominent surgeons and about 40 percent of the anesthesiologists at Beaumont’s nationally ranked Royal Oak and Troy hospitals have resigned or given notice in recent weeks. Major practice groups are actively negotiating to join rival hospitals.

I’ve learned in recent days that dozens of nurses, most of them with decades of experience, have been pushed out the door or are leaving on their own.

Others are being forced to work in specialized units not suited for their interests and experience. Even certified registered nurse anesthetists (CRNAs), who are more critical than ever to Beaumont’s big volume and highly profitable surgery business, are quitting or actively soliciting jobs elsewhere. 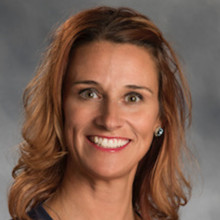 Fox insists he has recalled half the 2,400 employees that he laid off in April, but multiple sources question the claim. Regardless, I’ve confirmed that additional terminations have occurred in recent weeks and some employees maintain they aren’t getting the severance they are due.

The sinking Beaumont ship took on more water this week when a low-cost outsourcing firm called NorthStar on Thursday took over the anesthesiology procedures at Beaumont’s southern hospitals in Dearborn, Wayne, Trenton, and Taylor from Anesthesia Partners of Ann Arbor (A4).

Only nine A4 doctors are understood to have joined NorthStar, and they are being sued on multiple fronts for violating noncompete agreements. The litigation includes multiple pursuits of injunctions preventing the former A4 doctors from continuing to work their Beaumont jobs.

In a recent court affidavit, COO Wilson said Beaumont’s patient care would be adversely affected if there were a sudden disruption to its team of anesthesiologists, particularly during a predicted second wave of the pandemic. Beaumont’s southern hospitals require about 25 anesthesiologists to adequately function, meaning the turnover has exceeded 60 percent.

Anesthesiologists are critical during the pandemic because they perform or oversee intubations for ventilators that some Covid patients require.

Widespread employee dissatisfaction with Fox and Wilson is measurable and documented. A recent survey of more than 1,500 doctors working at Beaumont’s eight hospitals revealed the vast majority have no confidence in Beaumont’s leadership or support Fox’s plan to merge Beaumont into Chicago-based Advocate Aurora. Doctors at these hospitals are represented by the Council of Elected Medical Staff Leaders (CEMSL), whose job it is to communicate the issues and concerns of their colleagues to Beaumont’s board. Each Beaumont hospital has one CEMSL representative, regardless of size or prestige.

The eight CEMSL leaders apparently just fell off the turnip truck. According to Crain’s Detroit Business, which appears to have a reporter embedded on the truck, the CEMSL has negotiated to get Beaumont’s board of directors to add three doctors to the 16-member group.

Here’s why that’s akin to rearranging the deck chairs on the Titanic.

Beaumont’s board of lightweights so far is bent on supporting Fox’s merger with Advocate Aurora. If he pulls it off, Beaumont will become the Michigan outpost of Advocate Aurora, and its supposedly “independent” board will be ceremonial.

What Beaumont desperately needs is competent leadership that can staunch the company’s destruction and save patients from dying because of the mismanagement and ill-considered and poorly executed cost cutting.  Wilson’s decision to award NorthStar with a controversial and ethically questionable contract triggered an avalanche of falling dominoes from which Beaumont will never recover. The challenge is what can be salvaged.

If CEMSL leaders had any cojones, their non-negotiable demands of the board would have been the immediate firing of Wilson and the withdrawal of the Advocate Aurora merger. Beaumont is too unstable to withstand the disruption that inevitably accompanies a merger, particularly during a pandemic.

The nurse who sent out the mass email giving his two-week notice is highly regarded among his colleagues for his dedication and smarts. It speaks volumes about Beaumont’s management if on a Friday night in August it directed someone in the IT department to delete the email from the mailboxes of everyone it was sent to.

It’s the mindset of a totalitarian regime that mistakenly thinks that making evidence disappear means an event never happened. A Beaumont manager took away the nurse’s badge, indicating he was subsequently fired, and possibly making him ineligible for an additional two weeks pay. The nurse who sent the email to colleagues didn't respond to a Linkedin email for comment.

Meanwhile, a friend tells me that a relative who was recently treated at Beaumont Royal Oak was asked to sign a document saying he wouldn’t discuss his hospital experience with the media. Beaumont is even taking measures to silent its patients.

If CEMSL leaders want to establish a modicum of credibility with their colleagues, they should insist the fired Troy ER nurse be reinstated and his concerns be heard and addressed. The fired nurse’s hospital return would provide a valuable lesson for Michiganders on how heroes treat their fellow heroes.

Here are the names of CEMSL leaders representing Beaumont’s doctors.