Starkman: Beaumont Fox’s Thanks to Hospital Docs: ‘Let Them Eat a Cookie.’

In a new low for someone whose repeatedly demonstrated no shame, Beaumont this weekend sent the hospital system’s doctors an invitation to drop by their lounges to enjoy “an individually wrapped cookie” with their colleagues, “while supplies last.” Gluten-free cookies also will be available.

Beaumont acknowledged in the invitation the gesture was “a small token of appreciation.” 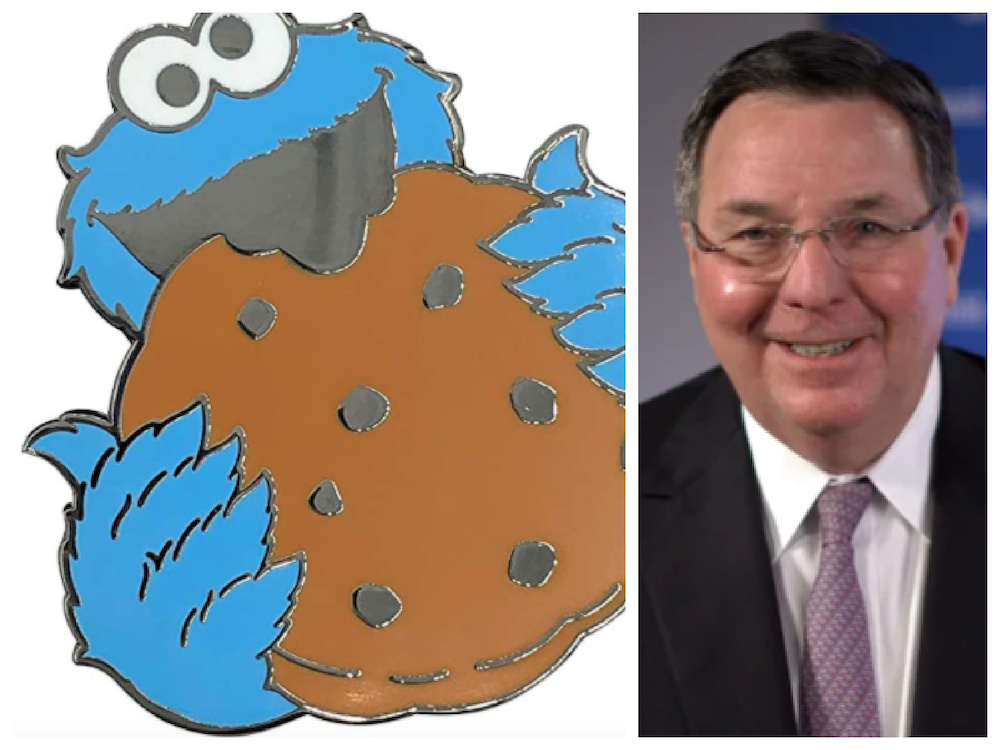 No, the offer is a giant FU, perhaps payback for a survey last year that revealed a majority of Beaumont doctors had no confidence in Fox and his management team’s leadership. Most of Fox’s widely disrespected senior managers, including former COO Carolyn Wilson and Chief Medical Officer David Wood Jr., are long gone.

Adding insult to injury, the cookie invitation was unsigned. A year ago, after Fox was forced to call off his plans to give away Beaumont to Advocate Aurora because of the obscenely favorable terms he granted the Illinois-based company, Fox personally handed out cookies in the lobby of Beaumont’s flagship hospital in Royal Oak.

Fox is confident that he no longer needs the support of Beaumont’s doctors. Beaumont in June announced plans to be taken over by Grand Rapids-based Spectrum Health. While the Michigan media shamefully refers to the deal as a “merger,” for all intents and purposes Spectrum is taking over a very troubled Beaumont Health. The few remaining executives from the management team Fox assembled when he arrived more than six years ago live in his native Atlanta and likely won't stick around. Fox, who also has a luxury home in North Carolina, plans to bolt as well.

Fox expected Spectrum’s takeover would be completed before year-end, allowing him to escape another Michigan winter. But the Federal Trade Commission is backed up, and the agency’s likely rubber stamp approval might not come until the spring of next year.

Beaumont has approximately 5,000 physicians. Let’s assume Beaumont buys its cookies through HealthTrust, its group purchasing organization. GPOs supposedly can negotiate volume discounts, but critics says hospitals can do better negotiating their own deals. Assume after HealthTrust’s markups and other hidden costs, Beaumont’s unit cookie price is $5, or $25,000 for the whole cookie stash.

Beaumont has a $3.5-billion cash reserve, so $25,000 is a rounding error Beaumont’s CFO would hardly notice – that is if it had one. The last person known to hold that job was John Kerndl, who left March 16 when Beaumont paid out its executive bonuses. 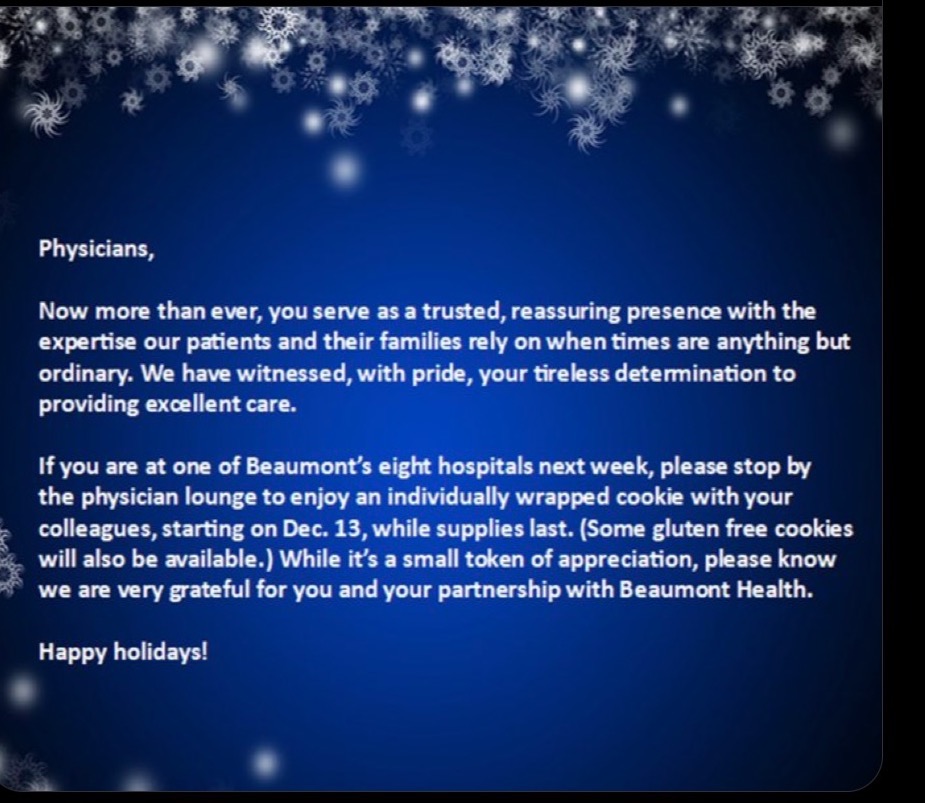 But there are some details Metro Detroit residents should sweat.

Beaumont has repeatedly maintained that its Covid patients are “overwhelmingly unvaccinated.” Overwhelmingly to me means at least 85 percent. Beaumont’s internal stats tell a slightly different story.

On Dec. 7, the latest internal stats I obtained, nearly one-quarter of Beaumont’s system-wide patients were fully vaccinated. Fully vaccinated patients accounted for 25 percent of Covid patients in the ICU and 21 percent of those on ventilators.

Fox previously implied that the unvaccinated were responsible for overrunning Beaumont’s emergency rooms.

Another detail the Detroit media shamefully overlooks, or prefers not to mention, is that Beaumont’s capacity problems aren’t solely because of Covid patients. Beaumont hospitals, particularly Royal Oak and Troy, were hemorrhaging staff long before the pandemic because working at the health system under Fox has long been an awful experience.

The nursing shortage has forced Beaumont hospitals to close wards, limiting the available beds to admit patients. At Beaumont Troy, the only five-star hospital in the system’s network, there were recently 70 patients in the ER awaiting admission to the hospital. The ER staff is doing double duty as ward caregivers.

I know of one patient who waited in Troy’s ER for 19 hours for treatment. That doesn’t strike me as all that safe in the midst of a pandemic.

The Michigan media has given Gov. Gretchen Whitmer, Attorney General Dana Nessel, and the Michigan Hospital Association a pass for the hospital crisis the state is experiencing.

Michigan was widely expected to see a surge in Covid cases as the weather turned cold. Michigan is especially vulnerable to severe Covid cases because people with obesity are more likely to land in the ICU and die because of the disease.  Michigan consistently ranks among the top 10 to 15 most obese states in the country, according to Michigan’s Department of Health & Human Services. Thirty-one percent of Michiganders are obese and 35 percent are overweight.

A responsible governor would have convened an emergency task force to plan for the surge. Nessel should have heeded Beaumont donor and former board member Mark Shaevsky’s warning a year ago last September to remove Fox and the irresponsible board members that supported him. Fox in April 2020 demonstrated his unfitness to manage during a pandemic when he inexplicably closed Beaumont Wayne, temporarily, a hospital catering to poor and disadvantaged people, and transferred patients to other area hospitals.

One of those patients, tagged as unstable for transfer, died in transit.

The Michigan Health & Hospital Association represents the managements of most of the state’s hospitals. Guess who is chair of the MHA? Spectrum CEO Tina Freese Decker. Spectrum recently received military assistance to help manage its overrun Grand Rapids hospital. Freese Decker can’t adequately manage her hospital in a crisis, and she’s chair of the Michigan Heath & Hospital Association?

Fox is a former chair of the MHA, further underscoring the questionable competency of the organization to ensure Michiganders can get quality and immediate hospital care in the midst of a health crisis.

A responsible attorney general would take notice, particularly as one of Spectrum’s top former executives has twice publicly warned Freese Decker’s Beaumont takeover could result in a “massive financial loss.”

Not for her it won’t. She’ll get a generous boost in compensation.

No one in Michigan seems to care. In fact, some rich folks continue subsidizing Beaumont. Jim and Patti Anderson, who recently donated $3 million to Beaumont Grosse Pointe, are among them. It’s the biggest donation in the hospital’s history.

Beaumont, I’m told, has urged its doctors to leave bequests in their wills, yet there is no record of Fox making any sizeable donations to Beaumont. He’s already been paid more than $20 million in compensation for about six years of poor performance, and he is expected to earn millions more if the FTC lets Freese Decker rescue Beaumont from further implosion.

I’m dumbfounded southeastern Michigan residents aren’t outraged what Fox is getting away with and aren’t holding Whitmer and Nessel accountable. It’s my hope that not one Beaumont doc helps themselves to Fox’s cookies, implicitly letting him know where he can shove them.

It would be a particularly strong statement, given the dire conditions of Beaumont Royal Oak’s endoscopy center.