Beaumont Health CEO John Fox, the Atlanta carpetbagger who destroyed the company’s flagship Royal Oak hospital while pocketing more than $20 million for himself, appears close to pulling off what he set out to do from the moment he arrived in Metro Detroit six years ago: Merging southeastern Michigan’s biggest hospital network out of existence.

Beaumont has signed a letter of intent to merge with Spectrum Health, a Grand Rapids-based hospital network focused on Western Michigan, the company announced internally Wednesday. The deal, which was announced Thursday, is still subject to various regulatory approvals.

I expect Fox to promote the deal as “a merger of equals” and it’s possible the Beaumont name could be retained in some capacity, but don’t be fooled: The combination is Fox’s Hail Mary attempt to cash out and distract from the extensive damage his leadership has caused. 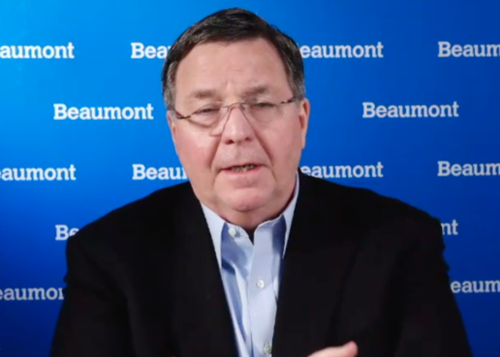 Beaumont spokesman Mark Geary ignored a request for comment. Spectrum spokeswoman Ellen Bristol Wednesday morning said she would “look into” whether a merger was imminent, seeming to indicate Deadline Detroit’s inquiry was the first she’d heard of a potential deal. She never followed up with a comment.

The deal will invariably be good for Fox, as he will likely get a very lucrative exit package to sail into the Georgia sunset. Though Spectrum Health is a respectable hospital network run by a management and board deeply committed to the Grand Rapids area, the evidence is overwhelming that southeastern Michigan residents won’t ultimately benefit from the deal.

Bloomberg on Wednesday posted an editorial warning about the growing merger trend among hospitals, noting that it leads to higher insurance prices. Studies also show that hospital mergers also result in a decline in patient care.

One need only look at Beaumont, an amalgamation of the Beaumont Health System, Royal Oak, Oakwood Healthcare, Dearborn, and Botsford Health Care in Farmington Hills that was created in 2014. The merger rationale was that hospitals benefitted from getting bigger and achieving economies of scale.

The Beaumont Health System, comprised of Royal Oak, Troy, and Grosse Pointe hospitals, was far superior and the expectation was that the merger would elevate the quality of staff and patient care at the Oakwood and Botsford hospitals. Instead, thanks to aggressive cost cutting and other misguided decisions by Fox and COO Carolyn Wilson, Beaumont imploded. Fox took his marching orders from John Lewis, a retired Comerica executive who came from Oakwood and was named chairman of the combined organizations.

When Fox arrived, Beaumont Royal Oak was among the best regional hospitals in the country; today it can best be described as a giant but mediocre community hospital. The quality of care has declined to such a degree that insiders readily admit they wouldn’t entrust their families’ care to the hospital.

It’s a no-brainer to understand why Fox desperately needs to pull off the Spectrum merger. His chief marketing officer resigned last September, his CFO quit in March, his chief compliance officer left a few weeks ago, and his chief revenue officer is out the door in a few days. Jane Jordan, Beaumont’s general counsel, is said to have stuck around only to help Fox negotiate a merger deal.

Given that a survey of Beaumont doctors revealed last year they had no confidence in Fox, Wilson, and chief medical officer David Wood Jr., recruiting top quality executives to Beaumont is a near impossible challenge with Fox and Wilson at the helm.

Less readily understood is why Spectrum would want to do a deal. Combining Spectrum with Beaumont would be akin to Target, whose management is respected and its brand has a loyal following, merging with Macy’s, a troubled chain whose flagship store in midtown Manhattan has lost its luster much like Beaumont Royal Oak.

Spectrum’s CEO Freese Decker joined Spectrum in 2002 as an administrative fellow, a program designed to train master’s level graduates the administrative aspects of a healthcare facility. Freese Decker held various strategic and operational roles before being named to the top job in 2018.

As best I can tell, Freese Decker is genuinely committed to forging relationships with the communities Spectrum serves, unlike Fox and his managers, many of whom don’t even live in the Detroit area. Fox owns homes in Atlanta and North Carolina, Wilson’s primary home is in Grand Rapids, Jordan, Beaumont’s chief counsel, commutes from Atlanta, as does Susan Grant, the company’s chief nursing officer.

Fox is about 70, and given his failed performance, it was a given that he wouldn't lead the combined Spectrum Beaumont entity. Fox and Wilson could possibly be given lucrative ceremonial or “consulting roles,” which would antagonize Beaumont’s rank-and-file because both executives are widely despised. Employees blame them both for Beaumont’s implosion. Allowing them to continue profiting from their mismanagement would undermine Spectrum management’s credibility from the get-go.

In quickly reviewing Spectrum’s website and news releases, I can't find evidence that Freese Decker has expressed the belief that Spectrum needed to achieve considerable size to survive and remain competitive. Spectrum appears to have grown organically, focused on a region it knows well.

Merging with Beaumont would more than double Spectrum’s size in some areas. Spectrum, with $6.9 billion in revenues, operates 14 hospitals in the western side of the state and has 30,000 employees. Beaumont reported operating revenues of $4.6 billion in 2020 and is only an eight-hospital system. However, Beaumont Royal Oak is one of the busiest surgical centers in the country.

Beaumont at one point claimed to have 38,000 employees, but with layoffs and unfilled positions it’s not clear how many employees remain. According to one source, Beaumont at least until recently had more than 3,000 job openings.

Spectrum has also been embroiled in controversy that made national news. A Grand Rapids television station revealed that operating room OBGYN doctors were posting photos on social media of them holding up surgically removed organ and tissue material as part of a game they likened to “The Price Is Right.” The report by NBC affiliate WOOD is a classic worth watching because the reporter can’t believe what she’s actually reporting.

One of the deciding factors in evaluating merging Beaumont and Spectrum will be the financial terms of the deal. Based on Fox’s history, it’s quite possible it will be terms that most benefit him.

In June of last year Fox announced he planned to merge Beaumont into Advocate Aurora, a Chicago-based hospital network whose CEO was on record as having insatiable ambitious plans. Under the terms of the deal Fox negotiated, Advocate Aurora would have taken over Beaumont and its $2.5 billion reserve without forking out a penny.

Fox trumpeted the deal as a win for Southeastern Michigan because he said Advocate Aurora would invest $1 billion to move the William Beaumont Medical School in Rochester to the Royal Oak campus and upgrade Beaumont’s technology. The terms of the deal were so obscenely favorable to Advocate Aurora that Rep. Andy Levin, whose district includes Beaumont Royal Oak, announced he would oppose the deal.  Fox cancelled the Advocate Aurora deal a few days later.

Despite warning the pandemic would destroy U.S. hospitals, Beaumont overall had a very good year in 2020, increasing its reserve by $1 billion to $3.5 billion. No doubt the pot of cash is the bait that got the merger talks going.

A hospital CEO committed to the best interests of their organization and the communities it services would typically demand a premium of one times the annual revenue, meaning Spectrum should pay nearly $5 billion to take over Beaumont. Spectrum no doubt knew that Fox was desperate to unload Beaumont, so Freese Decker had him by the cajones.  The financial terms of the deal will reveal whether Freese Decker is as touchy-feely as she appears or whether she can be quite ruthless when a lucrative financial opportunity presents itself.

That Fox, who along with Wilson has shown they have no commitment to southeastern Michigan, was allowed to negotiate Beaumont’s fate underscores just what an irresponsible disgrace Beaumont’s board is. A responsible board would have fired Fox months ago and brought in an interim CEO with strong ties to southeastern Michigan to try and stabilize the place. Even if the executive couldn’t restore Beaumont to its former glory, he or she could at least have minimized the damage and fetched a higher price for the hospital network than whatever Fox has negotiated.

Lewis, the board chair, was replaced earlier this month by Julie Frehm, president and CEO of the Original Equipment Suppliers Association.

Even when Fox announces a merger deal with Spectrum, there’s still no guarantee it will go through. He previously concluded a deal with Akron-based Summa Health but backed out despite already having received regulatory approval. Soon after, Fox announced the Advocate Aurora deal.

A merger of Spectrum and Beaumont must be approved by Michigan Attorney General  Dana Nessel, who has shown no interest in championing healthcare issues and can be counted on to rubber stamp the deal.