Starkman: Beaumont Board Promotes $1.1 Billion in Investments, but Promises Not Worth the Paper They're Printed On

Guess who Beaumont’s beleaguered health care workers heard from today? Board chairman and former Comerica top executive John Lewis and his band of “independent” directors. And boy did they blow smoke employees' way.

News must have trickled down to the country club set that Beaumont’s top doctors are looking to bail, and the disgruntled rank-and-file see no obvious benefits in CEO John Fox’s plan to give away Beaumont to an out-of-state health care company whose hospitals are reputationally inferior. The deal would be akin to the Ford family merging the Lions with a Canadian Football League team and having them play north of the border.

First, let me share some pretty big news buried in the letter. Beaumont’s board said that after the company is folded into Advocate Aurora, the new organization would invest up to $1.1 billion in Beaumont’s clinical programs, technology, and facilities over the next three years in Michigan. The letter said the monies are “significantly more” than Beaumont Health’s historical annual capital budget.

Wait, there’s more: A 30 percent increase in funding will be provided to the Beaumont Research Institute and “substantial funds” will be provided for a new medical school building at Beaumont’s flagship hospital in Royal Oak. Further investments would be made for the development of new technology and innovation “resulting in growth and potentially more Michigan jobs.”

Doctors are notoriously bad understanding business, but even they must know that if something sounds too good to be true, it probably is. There is no mention in the letter of a contractual obligation to make these investments, and even if there is, there’s still no guarantee they’ll be made. Look no further than the investment and other promises made in connection with the purchase of DMC 10 years ago. It’s not clear all of them were honored

Fox will be long gone once the merger gets done, snacking on peaches in the Atlanta home he is currently building. He’s on record as saying the merger wouldn’t result in any hospital sales or layoffs. So, if all the oodles of promised monies materialize, where will it all come from?

Under Fox’s and COO Carolyn Wilson’s watch, the process is already well under way.

For weeks I’ve been receiving confidential emails from conscientious Beaumont health care workers alerting me to what they say are unsafe conditions. Under the guise of lost revenues because of the pandemic, Fox has furloughed 2,400 employees and eliminated 450 jobs despite receiving $323 million in federal funds to protect these workers.

Conditions at Beaumont are so dire that at least eight surgeries at the company’s premier Royal Oak hospital were cancelled last week because there was insufficient support staff to sterilize equipment. A nurse posted on a Beaumont Facebook page that she’s so stressed she fears having a heart attack or stroke at work.

Exodus of skills and experience

Wilson recently cut deals with a low-cost outsourcing provider to staff and manage all the anesthesiology procedures at seven Beaumont hospitals; my understanding the provider, Dallas-based NorthStar, is getting the contract for Beaumont Farmington Hills as well.

The upshot of these deals is that more than 100 anesthesiologists working at Beaumont hospitals are getting the boot, including more than 60 fellowship-trained doctors with the specialized experience and skills to support the advanced and intricate surgeries that have given Beaumont its national ranking.

NorthStar can offer lower costs because it plans to make greater use of certified registered nurse anesthetists. Many of Beaumont’s nationally ranked surgeons are uncomfortable with the arrangement and are negotiating to join other hospitals or ambulatory surgical centers.

A study last year ranked Beaumont’s patient fees among the lowest in the country, but that likely will change once the Advocate Aurora merger goes through. Studies show that hospital mergers invariably lead to higher patient costs but no increase in the quality of patient care.

The board in its letter emphasizes that it is not “selling” Beaumont and that the company will have a “regional” headquarters with its own directors. Selling Beaumont could have some potential benefit because southeastern Michigan residents would at least be receiving some compensation for the community’s prized health care asset. Instead, Fox is literally giving Beaumont away, folding into another organization with dual headquarters in Illinois and Wisconsin in a non-cash transaction.

The board letter makes no mention of Beaumont’s agreement to sell its not-for-profit ambulance division to a for-profit company based in Chicago and how that transaction would have any benefit for Michigan residents.

Underscoring the disingenuousness of the letter, the board said it has “the utmost confidence that the experienced Beaumont leadership team will continue to protect Beaumont’s interests and ensure that its mission, vision, and values are preserved and enhanced.”

Fox, believed to be 72, put his Bloomfield Hills estate up for sale months ago and is building a luxury home in the Atlanta area. Fox has made no commitments to stay on after the merger is completed. In all likelihood, he’ll be bolting Michigan as soon as the Advocate Aurora deal closes and he receives a lucrative performance bonus and possibly a generous consulting contract.

Most galling of all for Beaumont’s health care workers likely was this board comment regarding their pandemic efforts: “We are in awe of the amazing, heroic efforts of Beaumont’s clinical teams.”

Yeah, right. Then why did Henry Ford Health System pay its front-line doctors and nurses considerably more for risking their lives during the pandemic?

Let me put a fine point on all this. Beaumont’s future is being driven by an accountant with no ties to the state. The chairman of the board is a former top executive of the bank that abandoned Detroit to pursue greener pastures in Dallas and elsewhere. 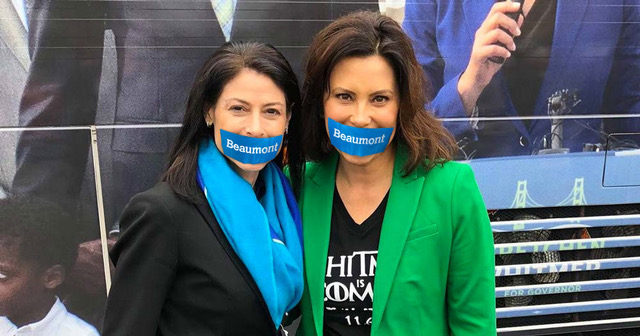 AG Dana Nessel and Gov. Gretchen Whitmer have been silent.

Beaumont’s merger with Advocate Aurora must be approved by Attorney General Dana Nessel, who hasn’t even paid lip that she will carefully scrutinize the transaction and make certain it’s in the best interests of Michigan residents. This is the same Dana Nessel who campaigned as a consumer advocate. Gov. Gretchen Whitmer has also been silent about the transaction.

President Trump previously dismissed Nessel as the “Wacky Do-Nothing Attorney General.” If Nessel rubber stamps Beaumont’s merger with Advocate Aurora, it will demonstrate that Trump knew what he was talking about.